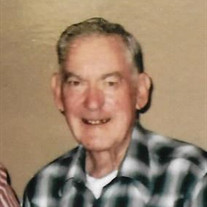 Amil McCurry, 83, of Wellington passed away December 5, 2018 at Shirkey Nursing and Rehab, Richmond. Amil will lie in state at Walker Nadler Fuller Funeral Home, Lexington on Sunday, December 9, 2018 from 2:00 until 4:00 pm. Private graveside service with Military Honors will be Monday, December 10, 2018 at Missouri State Veterans Cemetery, Higginsville. Memorials may be made to the Wellington Food Pantry, the Friends of the Friendless or the donor's choice.

Amil was born October 3, 1935 in Murphy, Oklahoma to Jewel and Velma (Dotson) McCurry. He married Barbara Ann Meyer July 20, 1965 in Miami, Oklahoma. He was an Army veteran and served in Washington D.C. with the 3D U.S. Army Regiment, known as "The Old Guard". Amil worked as a telegraph installer for Western Union. After retirement, he worked for 18 years for Capitol Sand Plant. He was a member of the Independence Masonic Lodge #76 and was a past member of the Elk's Lodge.

Amil is survived by his wife, of the home; children, Mark McCurry and wife Kari of Lexington and Jennifer Watkins and husband John of Indianapolis, Indiana; grandchildren, Tony and Courtney Smith, Megan Christophene, Grace McCurry and Addie Watkins; and brother Ronald McCurry of Mesquite, Texas. He was preceded in death by his parents; brothers, Robert, Wayne and Wayman; and sister, Thelma.
To order memorial trees or send flowers to the family in memory of Amil McCurry, please visit our flower store.