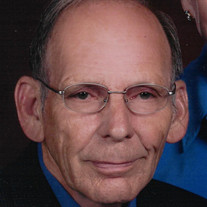 William “Bill” Leland Hellums, 87, of Odessa, Missouri passed away on Saturday, April 20, 2019 at the Missouri Veterans Home in Warrensburg, MO. A visitation will be held from 1:00 p.m. to 2:00 p.m., Wednesday April 24, 2019 at the First Baptist Church, 100 W. Hwy OO, Odessa, MO, 64076. A funeral service will follow at 2:00 p.m. Wednesday at the Church. Burial with military rites will be in the Greenton Cemetery. Memorials are suggested to the Missouri Veterans Home in Warrensburg, Pleasant Valley Unit or the VFW Post 5675. Memories of Bill and condolences for his family may be left at www.ledfordfamilyfh.com or on our Facebook Page. Bill was born on May 23, 1931 in Malta Bend, MO to Frank Edward and Mamie Elizabeth (Grisham) Hellums. He graduated in 1950 from Odessa High School in Odessa, MO. In March of 1951 he enlisted in the United States Army and served in the Korean War. Bill was awarded the Good Conduct Medal, Korean Service Medal w/Bronze Star device, Combat Infantryman Badge, United Nations Service Medal, and Korean Defense 50th Anniversary Commemorative Medal. Bill On June 30, 1956 he married Mary Lou (Maun) Hellums in Odessa. She survives of the home. Bill worked for Jack Cooper Transport in Kansas City, KS as a driver and various other positions until retirement. He was a member of the First Baptist Church, a Life Member of the VFW Post 5675, and a member of the Teamsters Local 41 in Kansas City, MO. In addition to spending time with family and friends, Bill enjoyed yardwork and being outdoors. Survivors include Bill’s wife, Mary Hellums of Odessa, MO; two daughters, Kelly Popovits and husband Kenneth of Homer Glen, Illinois and Annette Skinner and Fiancé Jared Trahan of Tyler, Texas; six grandchildren, Aaron, Dustie, Ashlea, Taryn, Abigail and Joseph; four great-grandchildren, Kaede, Blake, Timothy and Everly; and many nieces and nephews. In addition to his parents, Bill was preceded in death by four brothers, Frank Jr., Ralph, Paul, and John Hellums; and two sisters, Bernice Anglen and Dorothy Knutson.

The family of William "Bill" Leland Hellums created this Life Tributes page to make it easy to share your memories.

Send flowers to the Hellums family.