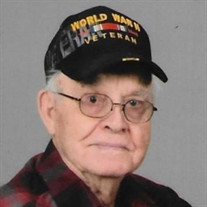 Wilbur Martin Neher, 96, of Mayview, Missouri passed away on Wednesday, June 23, 2021, at Lutheran Good Shepherd Nursing Home in Concordia, MO. A private memorial service will be held at a later date. Memorials are suggested to the Mayview Fire Department and may be left in care of Ralph O. Jones Funeral Home, 306 S. 2nd Street, Odessa, MO, 64076. Memories of Wilbur and condolences for his family may be left at www.LedfordFamilyFh.com or on our Facebook Page. Wilbur was born on May 12, 1925, to Edwin and Malinda (Mische) Neher in Mayview, MO. After graduating from Odessa High School in 1943 he enlisted in the United States Navy on January 3, 1946, in Kansas City, MO. Wilbur served in WWII until honorably discharged on November 29, 1947, in San Francisco, CA, receiving the Victory Medal. He joined the US Navy reserves from November 1947 to November 1952. On February 25, 1950, Wilbur was united in marriage to Detta Maxine (Green) in Mayview, MO. In his earlier years, he started out his career working as a farmer, he also worked for the Mayview Road District, and ASCS office in Higginsville. Wilbur was a member of Zion UCC of Mayview. He was also a member of the American Legion of Higginville, Mayview VFW, and Odessa VFW. In addition to spending time with family and friends, Wilbur and Detta enjoyed being “snowbirds” visiting Mercedes, Texas for 33 years. In addition to his wife, Detta, survivors include a son, Bryce Neher of Mayview, MO; a daughter, Gaye Cox and husband Alvin of Mayview, MO; four grandchildren, Jessica Wade and husband Jason of Odessa, MO, Kelsey Messer and husband Luke of Oak Grove, MO, Dustin Neher of Mayview, MO, and Kyle Neher of Higginsville, MO; six great grandchildren, Collin and Addison Wade of Odessa, MO, Cyler and Mya Messer of Oak Grove, MO, and Hadley and Scarlett Neher of Higginsville, MO; and a nephew, Larry Neher of Mayview, MO. Wilbur was preceded in death by his parents and a brother, Sylvian Neher.

Wilbur Martin Neher, 96, of Mayview, Missouri passed away on Wednesday, June 23, 2021, at Lutheran Good Shepherd Nursing Home in Concordia, MO. A private memorial service will be held at a later date. Memorials are suggested to the Mayview... View Obituary & Service Information

The family of Wilbur Martin Neher created this Life Tributes page to make it easy to share your memories.

Wilbur Martin Neher, 96, of Mayview, Missouri passed away on...

Send flowers to the Neher family.