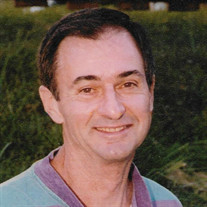 Wilbur Keith Marner, age 77, of Odessa, MO, passed away suddenly on Friday, April 1, 2022, at his home outside Odessa. Wilbur was born on Thanksgiving Day, November 23, 1944, in Iowa City, IA, the son of Max and Wanda (White) Marner. Wilbur raised his two sons with his former wife Connie on the same family farm where he grew up near Wellman, IA. In 1981, Wilbur moved his family to Missouri where he worked several different jobs. He married his wife Karen in 2013. After retiring from the Higginsville Habilitation Center, he returned to his love of working the land and caring for animals on the acreage outside of Odessa where he and Karen lived. Whether working on his family farm in his youth, gardening his prized Iris’s, or caring for his animals, Wilbur’s passion for farming and working on the land stayed with him throughout his life. His enjoyment for working outside, strong work ethic, and the joy he received from getting a job done well shines through in his previous work and in his last home where he achieved his dream of living in a log cabin home. Wilbur’s quirky and witty sense of humor made life more fun for those around him. Wilbur also enjoyed games and puzzles, a testament to his love for intellectual pursuits. When not working on an outside project, his family could often find him at the kitchen table with his glasses perched on his nose and his radio playing in the background, reading the newspaper. Perhaps most importantly, Wilbur was also a loving grandfather to his grandchildren. He never missed sending a birthday card, delighted in spending time with them, and supported them in their activities. Wilbur is survived by his wife Karen; children Lennie (Amy S) Marner of Cedar Rapids, IA and Cory (Amy E) Marner of Holyoke, CO; step-children Aubrey Binder of Warrensburg, MO; Elizabeth Gabreyl of Green Bay, WI; Christopher (Kristi) Binder of Odessa, MO; Randi Binder of Pulaski, WI; grandchildren Nichole, Heather and Caleb Marner of Cedar Rapids, IA; Gabriel (Alyssah) Marner of Ault, CO; Hannah Marner of Holyoke, CO; step-grandchildren Kendall Binder of Warrensburg, MO; Amber and Lauren Gabreyl of Green Bay, WI; Hayden, Kaylynn, Joslynn and Jameson Binder of Odessa, MO; Daniel Binder and Caleb, Asher and Priscilla Gilbert of Pulaski, WI; sister Colleen (Terry) Beaudoin of Rockford, MI. He was preceded in death by his parents, Max and Wanda Marner. Wilbur’s family will have a private family service at a later date. Arrangements have been entrusted to the Ralph O. Jones Funeral Home, 306 S. 2nd St., Odessa, MO, 64076, 816-633-5524. Memories of Wilbur and condolences for his family may be left at www.LedfordFamilyFH.com or on our Facebook Page.

The family of Wilbur Keith Marner created this Life Tributes page to make it easy to share your memories.

Send flowers to the Marner family.