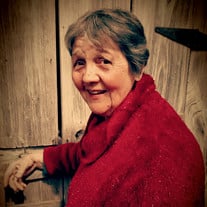 Virgie “Jo” Murry, 77, of Odessa, Missouri, formerly of Bates City, MO, passed away peacefully on Wednesday, February 19, 2020 at her home. The family will host a Celebration of Life, from 4:00 p.m. to 6:00 p.m., Thursday, March 5, 2020 at the First Baptist Church of Bates City, 200 Market St, Bates City, MO 64011. Memorials are suggested to Lafayette County Cancer Coalition, P.O. Box 88, Higginsville, MO 64037 or Wayside Waifs, 3901 Martha, Truman Rd, Kansas City, MO 64137. Memories of Virgie and condolences for her family may be left at www.LedfordFamilyFh.com or on our Facebook Page. Cremation has been entrusted to Ralph O. Jones Funeral Home, 306 S. 2nd Street, Odessa, MO 64076, 816-633-5524. Virgie was born on Saturday, April 11, 1942 in Napoleon, MO, the daughter of Virgil William and Josephine Wilhelmine (Wulfekotter) Murry. Virgie attended Bates City school for her younger years, then proceeded to Odessa school for grades 9th through 12th, graduating in 1959. She was employed for 35 years at the Bates City Post Office. She eventually retired as Clerk of the Bates City Post Office. She was a member of First Baptist Church of Bates City. Virgie’s family moved to Bates City around 1949, where she lived most of her life. She took pleasure in the farm life. They raised cows, sheep, chickens, hogs, a few geese and coonhounds, plus some stray cats and dogs along the way. Virgie had a special friend, a pet pig named, “Arnold Lee Zeiffel.” He grew to be a pudgy 900lb pal. A couple of her sheep made quite the impression on her too. One in particular, “Cookie” would always be at her side nibbling on her shirt. She was her shadow. One pup among them all stole her heart. His name was Bailey, her true buddy. Virgie enjoyed various activities. She liked to scrapbook, bake cakes, can foods, write handwritten letters, work on puzzles, feed her birds, plant flowers, read books, and watch her cowboy shows. She liked collecting elephants, chickens, and pigs! She got a kick out of her Kansas City Royals! She had fun coordinating the Bates City Reunion for many years. She enjoyed being involved with all types of church activities. Virgie wasn’t much of a traveler, but she did get to Nebraska; where she went to the zoo, took in several museums, rode a trolley and finished in Hannibal, MO, where she took an hour ride on the Mark Twain Riverboat, down the Mississippi River. Most of all she enjoyed her family, friends and all the critters she met along the way. She leaves behind many cousins and friends. In addition to her parents, Virgie was preceded in death by both paternal grandparents, John Wesley and Minnie Mary (Walter) Murry; and maternal grandparents, Caroline Mary Lienke and Frederick William Wulfekotter.

The family of Virgie Josephine Murry created this Life Tributes page to make it easy to share your memories.

Send flowers to the Murry family.