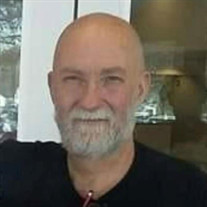 On Tuesday, April 20th, 2021, Tony Cogdill, loving husband and father of two children, passed away at the age of 59. Tony was born on July 29, 1961 in Kansas City, MO to Sharon and Jasper Cogdill. After graduating from Lincoln High School in 1979, he served in the US Navy from 1979-1983. Tony raised two sons, Chase and James. On January 5, 2006, he married Chae (Choe) Cogdill. Tony was known for his quick wit and his kind and compassionate spirit. Despite his intense love for the Kansas City Chiefs, he would leave in the middle of a game if a family member or friend needed him - but he would also give you a hard time for years about making him miss the big touchdown. Tony also hated missing any Thursday game and dinner nights with the guys - unless it meant a “guys night” with his grandson, Jack. Even in his last days, there was never a room Tony entered without making a friend - from the nurse who he convinced to braid his beard to dialysis technicians who stayed past their shift time to chat. Tony was preceded in death by his father, Jasper, and his mother, Sharon. He is survived by his wife Chae, his two children, James (and his partner Misty) and Chase, two grandchildren, Jack and Tilly, his sister Vicki and her husband Tim, his Aunt, Luella Burge, several cousins, nephews, and a niece. To honor the true spirit of Tony Cogdill, the family will host a Celebration of Life at the Odessa VFW (9642 E Old Hwy 40, Odessa, MO 64076) Friday, May 14, 2021, 6-9 PM. In lieu of flowers, donations can be made in his name to the American Heart Association. Arrangements have been entrusted to Ralph O. Jones Funeral Home, 306 S. 2nd Street, Odessa, MO, 64076, 816-633-5524. Memories of Tony and condolences for his family may be left on our website www.LedfordFamilyFH.com or on our Facebook Page

On Tuesday, April 20th, 2021, Tony Cogdill, loving husband and father of two children, passed away at the age of 59. Tony was born on July 29, 1961 in Kansas City, MO to Sharon and Jasper Cogdill. After graduating from Lincoln High School in... View Obituary & Service Information

The family of Tony Mike Cogdill created this Life Tributes page to make it easy to share your memories.

Send flowers to the Cogdill family.