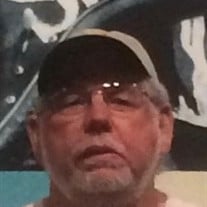 On June 6, 2021, Stephen Helm left this world to join all the blues travellers that passed before him. The day was fitting (D-Day) for Steve had a love of World War II. He read many books on the subject. His dad was in the Pacific Theatre. His father-in-law was in the European Theatre. Rosemary Collins and J. B. Helm welcomed their second son on April 10, 1950, at Lexington Hospital. Being the second son, they could not decide on a middle name, so Steve went through life with NM in his full name. During his younger years, Steve was a parishioner of Immaculate Conception Catholic Church. He attended Catholic School from First to Eighth Grade. He graduated from Lexington High School in 1968. High school where he acquired the nickname "Gunner". During his young years, Steve had a band of brothers - Ron Neer, Russell (Spark) Sharp, Elliot Braden, Dorian Anderson, Dennis DeMint, and Ron Milburn. These men have been friends until death separated them. Steve joined the Naval Reserves in 1969. He went to Naval Station Great Lakes for training. He was assigned to the USS Ranger, CV-61, Aircraft Carrier and did a nine-month tour in Gulf of Tonkin. In 1969, he met the love of his life, Cumi. They met on a blind date, and as he has told everyone, the first kiss sealed his fate. They celebrated their 50th Anniversary last year on September 11th. Not until 2001, did they realize the date was 911. On February 17, 1971, their son, Matt, was born. And yes, if you're counting, Matt was a nine-pound preemie! Steve met Matt for the first time on Father's Day due to his service in the Pacific. When Steve returned from active duty in 1972, he went to work at Armco Steel and stayed at the steel plant until it closed in May of 2001. He worked at Kohl's distribution center until August of 2008. Steve's love of baseball came from his dad, J.B and Louie Williams. Steve was the perfect coach. He taught the players on both Wellington little league teams how to pitch. If he had ball practice, both teams would be there. Steve, Paul, and Bill were instrumental in constructing the ball fields at Lions Club Park. These men moved dirt, hauled sand, and planted grass seed. If you attend a ball game at the park, be thankful to them. Steve was heavily involved in many community organizations: Lions Club, a Melvin Jones Award recipient; Jaycees; R-9 Booster Club; Cub and Scout Leader of Troop 317, Honorary Warrior Big Stalking Red Arrow, Tribe of Mic O Say; Wellington-Napoleon Fire Protection Board; American Legion; and Lexington VFW. Memorials may be made to Wellington Lions Club and the VFW Post 4052. Steve had a guitar that he bought when he was a teenager. He would talk about being a sit-in with many bands. He played at Teen-Town on the porch, as did every guitarist during the 1960s. Steve put down the guitar and didn't pick it up until his late thirties when he would play songs with musicians in the area. His grandson, Garrett, a leftie, could not play his grandpa's oldest guitar, so grandpa went shopping and purchased Garrett a Fender Strat when Garrett was eight years old. Their relationship was sealed with Steve teaching Garrett to play. Steve's coaching came back to him when he watched his grandson, Tyler, pitch in a ballgame. Matt asked his dad to give Tyler some pointers. Steve gets out of the stands, goes over and shows him a few tricks. After the successful next inning Tyler told his grandpa that the tricks worked. When Steve and Cumi retired, they began driving to Phoenix each January to escape the cold weather and to enjoy Ray and Vicki Pena and their family. Nothing pleased Steve more than sitting on their patio with a glass of Kessler and Lemon Lime, listening to music and talking blues with Ray. During February, Matt, Tyler, Garrett, and the girls would fly out for the Royals' Spring Training games, jeep tours, hiking and lots of celebrating. Steve looked forward to the family gathering each year. He loved his family. Steve was known for his gardens. He began gardening in the early eighties, keeping journals of what plants were successful. He always said nothing was better than working in the early morning with his hundreds of plants. Steve is loved by Cumi, Matt, Jill, Tyler, Garrett and Carson. He will be remembered by his brother, Mike (Judy) Helm and their children. Steve's in-laws are Ed and Chris Gooseman; Tahnami, Gerald, Brett, Izzie, and Dawson Gittinger; and Aldonna and Bob Burnett. Steve's cousins from Weston, Missouri and from Illinois will remember his love for them. Steve has many friends who will remember what a great guy he was. Many stories have been told over the last few days of things he had done for people, his opinions, and his love for his family. He had only one rule: Don't take his last beer in the refrigerator! Steve had chosen cremation. There will be no formal service, just a private service at the Missouri Veterans Cemetery. Instead, we are abiding by his wishes to have a party at the VFW - August 21st in late afternoon. Ahhh Hell!!! Arrangements have been entrusted to the Walker-Nadler-Fuller Funeral Home, 1720 South Street, Lexington, MO 64067, 660-259-2245. Memories and condolences may be left at www.LedfordFamilyFH.com.

On June 6, 2021, Stephen Helm left this world to join all the blues travellers that passed before him. The day was fitting (D-Day) for Steve had a love of World War II. He read many books on the subject. His dad was in the Pacific Theatre. His... View Obituary & Service Information

The family of Stephen Helm created this Life Tributes page to make it easy to share your memories.

Send flowers to the Helm family.