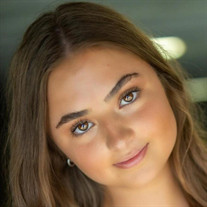 Sophia Dianne Patrick, 17, of Odessa, Missouri passed away on Saturday, August 1, 2020 at her home. A visitation will be held from 10:00 a.m. to 2:00 p.m. on Saturday, August 8, 2020 at the Odessa High School “Wood” Gymnasium, 713 S. 3rd Street, Odessa, MO 64076. A funeral service will follow at 2:00 p.m. at the school. Burial will be at the Odessa Cemetery. Memorials are suggested to the family in care of Felicia Patrick and can be left in care of the Ralph O. Jones Funeral Home, 306 S. 2nd Street, Odessa, MO, 64076, 816-633-5524. A scholarship fund will be established at a later date in Sophia’s memory. Memories of Sophia and condolences for her family may be left a www.LedfordFamilyFH.com or on our Facebook Page. Sophia was born on March 5, 2003 to Scott Henry and Felicia Michelle (Shaffer) Patrick in Blue Springs, MO. She was preparing for her senior year at Odessa High School. Sophia accomplished many things in her time at OHS. She was an outstanding student with a 3.906 GPA. She was a four-year varsity cheerleader, cheer captain, Class Vice President and served on the Student Council for four years. She received the following awards: 2019 All State in Cheer, Academic All-Conference all three years, UCA All American two years, Best Jumps Award, Best Top Girl Award, and was a Pin It Forward recipient. Sophia spent the majority of her time with family and friends. She also enjoyed dancing, shopping, tanning, making TikToks, photoshoots, reading poetry, eating popcorn while binge-watching Netflix series, making beaded bracelets, and she was very passionate about music. Sophia was well known and loved by many. Survivors include her parents, one brother, Brandon Kleoppel; three sisters, Kristen Kleoppel, Amanda Hotmer and husband Robert, and Rhyannon Patrick all of Odessa, MO; a maternal grandparent, Linda Clark of Odessa, MO; two nieces, Lilly and Anistyn; two nephews, Braden and Rhett; and many aunts, uncles and cousins. Sophia was preceded in death by her maternal grandmother, Donna Kay Smith, her maternal great grandmother Norene F. Wilson and a nephew Renick Lane Hotmer. Pallbearers will be Frank Patrick, Robert Hotmer, Chip Drenon, Chris Servi, Brian Curtin, and Matt Harshman.

The family of Sophia Dianne Patrick created this Life Tributes page to make it easy to share your memories.

Sophia Dianne Patrick, 17, of Odessa, Missouri passed away on...

Send flowers to the Patrick family.