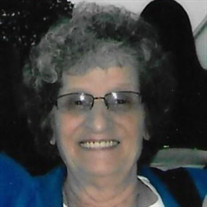 Shirley Ann (Claunch) Zeih, 85, of Odessa, Missouri, passed away on Sunday, December 26, 2021, at St. Mary’s Medical Center in Blue Springs, MO. A visitation will be held from 1:00 p.m. to 2:00 p.m., on Friday, December 31, 2021, at Ralph O. Jones Funeral Home, 306 S. 2nd Street, Odessa, MO, 64076, 816-633-5524. A Graveside Service will follow at the Odessa Cemetery in Odessa, MO. Memorials are suggested to the charity of the donor’s choice and may be left in care of the funeral home. Memories of Shirley and condolences for her family may be left at www.LedfordFamilyFH.com or on our Facebook Page. Shirley was born on April 19, 1936, to Leroy Alfred and Hazel Marie (Shippy) Claunch in Holden, MO. On April 2, 1955, she was united in marriage to Phillip Earl Zeih in Odessa, MO. He preceded her in death on November 20, 2020. Shirley was a homemaker and a Baptist by faith. In addition to playing Bingo and cards, she enjoyed spending time and visiting with family and friends. Shirley is survived by three children, Phyllis Wahn (Doug) of Lee’s Summit, MO; Michael Zeih of Independence, MO; and Darla Slocum (Darren) of Grain Valley, MO; two sisters, Jane Davis of Raytown, MO and Dorothy Begemann of Lexington, MO; a sister-in-law, Barbara Arey of Kansas City, MO; two brothers, John Claunch (Judy) of Kingman, AZ and Tommy Claunch (Janet) of Warrensburg, MO; four grandchildren; ten great grandchildren; and many nieces, nephews, relatives, and friends. Shirley was preceded in death by her husband; parents; two sisters, Betty Miller and Mary Ruth Barker; and four brothers, James “Bud”, Robert “Bobby”, Gene, and Jerry Claunch.

The family of Shirley Ann Zeih created this Life Tributes page to make it easy to share your memories.

Send flowers to the Zeih family.