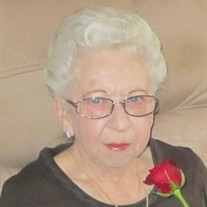 Shirley Jean Newton, 90, of Crestview, Florida, formerly of Wellington, passed away February 3, 2022 at Crestview Rehabilitation Center. Visitation will be Saturday, February 12, 2022 from 10:00 until 11:00 am at the First Baptist Church in Wellington. A graveside service will be on Saturday at 11:30 am at the Wellington City Cemetery. Memories and condolences may be left at www.LedfordFamilyFH.com. Arrangements have been entrusted to Walker-Nadler-Fuller Funeral Home, 1720 South Street, Lexington, MO 64067, 660-259-2245. Shirley was born September 13, 1931 in Wellington to Thomas Lathan and Nellie Irene (Vance) Moore. She attended Wellington High School and worked as a restaurant manager for many years. Shirley was very devoted to her children. She lived near or with her daughter, Lola until Lola's death. They were inseparable. Many slot machine handles were pulled between the two of them. They also enjoying lots of time traveling and playing pool. After Lola's death, Shirley moved back to Wellington to stay with her sister, Ruth Bryant. They loved playing bingo, eating tacos and QT hot dogs and stirring up trouble in Wellington, like they had done growing up. In 2006 she moved to Tulsa to help her daughter, Linda through all the trials of building a house. Then in 2014 she moved to Decatur, Illinois to be near her son, Kenneth. She had lived on a golf course near Linda so she wanted to live on a lake near Kenneth. In the fall of 2020 she moved with Kenneth's family to Crestview, Florida. Shirley is survived by two children, Linda Bryant of Pottsboro, Texas and Kenneth Newton and wife Erica of Crestview, Florida; grandchildren, Jon Bryant, Jeff Bryant, Angela Brown, Lisa Jaques, Tonya Torres, Ashley Newton, Kyle Newton and Grace Newton; 21 great grandchildren; 11 great great grandchildren; and brother, Lathan Moore. Shirley was preceded in death by her parents; daughter, Lola Nail; sister, Ruth Bryant; and brother, Donald Moore.

Shirley Jean Newton, 90, of Crestview, Florida, formerly of Wellington, passed away February 3, 2022 at Crestview Rehabilitation Center. Visitation will be Saturday, February 12, 2022 from 10:00 until 11:00 am at the First Baptist Church in... View Obituary & Service Information

The family of Shirley Jean Newton created this Life Tributes page to make it easy to share your memories.

Send flowers to the Newton family.