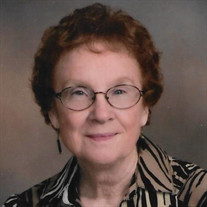 Selma “Elaine” (Ivy) Miller, 85, of Odessa, Missouri, passed away on Tuesday, March 23, 2021, at her home. A visitation will be held from 1 to 3 p.m. on Friday, March 26, 2021, at the First United Methodist Church, 301 S. 1st Street, Odessa, MO, 64076. A memorial service will follow at the church. In lieu of flowers, memorials are suggested to the First United Methodist Church or Trails Regional Library Odessa Branch. Arrangements have been entrusted to Ralph O. Jones Funeral Home, 306 S. 2nd Street, Odessa, MO, 64076, 816-633-5524. Memories of Elaine and condolences for her family may be left at www.LedfordFamilyFH.com or on our Facebook page. Elaine was born on October 5, 1935, to Frank R. and Selma E. (Gerkin) Ivy in Aullville, MO. She was a Higginsville High School class of 1953 graduate. Elaine worked as a librarian for Trails Regional Library Odessa Branch for over 20 years, retiring in December 2001. She was united in marriage first to Richard A. Plachte and later to James A. Miller, who preceded her in death on January 29, 2010. Elaine was a member of the First United Methodist Church of Odessa, United Methodist Women, and the Historical Society. She volunteered as a bell ringer for the Salvation Army and delivered for Meals on Wheels. In addition to spending time with family and friends, Elaine enjoyed playing cards, traveling, supporting the Kansas City Chiefs and Royals, and was an avid picture taker. Survivors include three sons and daughters-in-law, Doug and Kathy Plachte of Higginsville, MO, Mike and Pam Plachte of Odessa, MO, and Jeff and Sandi Plachte of Pensacola, FL; a sister and brother-in-law, Karen Kay Meyer and Roger of Plymouth, WI; nine grandchildren, Kessa Plachte, Cori Yearout, Amanda Hetherington, Jennifer Erwin, Shawn Plachte, Kristin Plachte, Samantha Baker, Zack Plachte, and Jason Plachte; 16 great grandchildren; and many relatives and friends. In addition to her husband, James, Elaine was preceded in death by her parents.

The family of Selma Elaine (Ivy) Miller created this Life Tributes page to make it easy to share your memories.