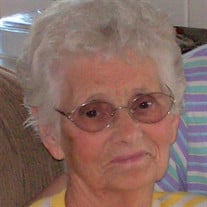 Ruby Margaret (Ballard) Prier, 93, of Odessa, MO passed away on Thursday, January 21, 2021 at Meyer Care Center in Higginsville, Missouri. A visitation will be held from 10:00 a.m. to 11:00 a.m., Monday, January 25, 2021 at Ralph O. Jones Funeral Home, 306 S. 2nd Street, Odessa, MO, 64076, 816-633-5524. A funeral service will be held at 11:00 a.m. at the funeral home. Burial will follow at the Kidd Chapel Cemetery in Lowry City, MO. Memorials are suggested to American Cancer Society. Memories of Ruby and condolences for her family may be left at www.Ledford FamilyFH.com or on our Facebook Page. Ruby was born on October 25, 1927 to Robert and Clara Bell (Mayer) Ballard in Iconium, MO. On October 15, 1949 she was united in marriage to Ralph Prier in Osceola, MO. He preceded her in death. Throughout the years Ruby worked at Odessa Cleaners, Action Products, in the kitchen and housekeeping at a nursing home in Odessa, and as a homemaker on their family farm. She was a Baptist by faith. In addition to spending time with family and friends, Ruby enjoyed gardening and working outdoors. Survivors include three daughters, Linda Soendker and husband, Larry of Mayview, MO, Betty Bertz of Lexington, MO, and Kathy Self of Odessa, MO; eleven grandchildren; numerous great grandchildren and great great grandchildren; and many nieces, nephews, relatives, and friends. In addition to her husband and parents, Ruby was preceded in death by a daughter, Deborah Bell Fiene; six brothers Arthur, Robert, Alva, Riley, Glen, and Herbert Ballard; and four sisters, Emma Ohm, Eva Murphy, Lula Radford, and Lucy Peyton.

The family of Ruby Margaret Prier created this Life Tributes page to make it easy to share your memories.

Send flowers to the Prier family.