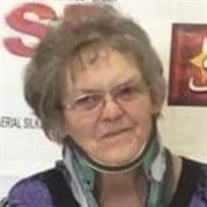 Rosetta “Rose” Dean (Milburn) Wells, 79, of Carrollton, MO passed away on Thursday, December 24, 2020 at Riverbend Heights in Lexington, MO with family by her side. A visitation will be held from 6:00 p.m. to 8:00 p.m., Tuesday, December 29, 2020 at Ralph O. Jones Funeral Home, 306 S. Second Street, Odessa, MO, 64076, 816-633-5524. Masks are required. A funeral service will be held at 2:00 p.m., Wednesday, December 30, 2020, at the funeral home. Interment will be at the Greenton Cemetery in Odessa, MO. Memorials are suggested to the Lex-La-Ray Nursing Program. Memories of Rosetta and condolences for her family may be left at www.LedfordFamily.FH.com or on our Facebook Page. Rosetta was born on September 23, 1941 in Lexington, MO to Earl and Mary Jane (Willard) Milburn. On September 3, 1980 she was united in marriage to Eugene “Gene” Chester Wells in Warrensburg, MO. He preceded her in death. Rosetta worked as a CNA for New Haven Living Center for over 36 years, retiring in 2016. She was a member the of Frist Assembly of God Church in Odessa. In addition to spending time with family and friends, Rosetta enjoyed crocheting, cooking, and relaxing in the hot tub. Survivors include two daughters, Mary Hylton and husband Ron of Camden, MO, Annette Looney, widowed of Carrollton, MO; a son, Earl Russell Martin and significant other, Sunshine Jaeger of Odessa, MO; a step-daughter, Debbie Wells of Milwaukee, WI; two brothers, Earl Gene Milburn and wife Hazel of Des Moines, IA, Ed Milburn, widowed of Lexington, MO; nine grandchildren; ten great grandchildren; one great great grandchild; a best friend, Carol Tracey and husband Jim of Independence, MO; and many nieces, nephews, relatives, and friends. In addition to her parents and husband, Rosetta was preceded in death by a daughter, Roxanne Martin in infancy; a brother, Larry Milburn; a sister-in-law, Barbara Milburn; and a son-in-law, Steven Looney.

The family of Rosetta Dean (Milburn) Wells created this Life Tributes page to make it easy to share your memories.

Send flowers to the Wells family.