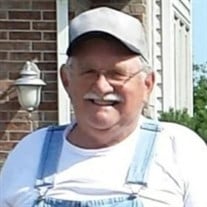 Ronald Eugene Hergemueller, 76, of Odessa, Missouri passed away on Thursday, July 15, 2021, at his home. A visitation will be held from 6:00 p.m. to 8:00 p.m., on Monday, July 19, 2021, at Ralph O. Jones Funeral Home, 306 S. 2nd Street, Odessa, MO, 64076, 816-633-5524. A funeral service will be held at 1:00 p.m., on Tuesday, July 20, 2021, at the funeral home. Interment with Military Honors will follow at the Concord Cemetery in Bates City, Missouri. Memorials are suggested to Pawsitive Tails and may be left in care of the funeral home. Memories of Ronald and condolences for his family may be left at www.LedfordFamilyFH.com or on our Facebook Page. Ronald was born on August 30, 1944, in Buckner, MO to Eugene Ernest and Hulda Helen (Knoche) Hergemueller. He grew up in Napoleon, MO and graduated from Wellington-Napoleon High School. Ronald went to work for a local farmer at age 14, and at age 17 started working for Levasy Elevation Company. He enlisted in the United States Army National Guard on August 16, 1965, in Lexington, MO. Once Ronald was honorably discharged in 1966, he then started his career at Lake City Army Ammunition Plant, retiring after 40 years in 2006. On July 4, 1983, Ronald was united in marriage to Sondra (Lay) Wallace. They shared 39 years together. In addition to spending time with family and friends, he enjoyed fishing, hunting, and farming. Survivors include his wife, Sondra, of the home; a son, David Allen Wallace and wife, Lisa, of Lee’s Summit, MO; a granddaughter, Alyssa J. Wallace of Lee’s Summit; and many relatives and friends. Ronald was preceded in death by his parents; and a son, Joseph Lee Wallace (August 12, 1975, to February 12, 2017).

The family of Ronald Eugene Hergemueller created this Life Tributes page to make it easy to share your memories.

Send flowers to the Hergemueller family.