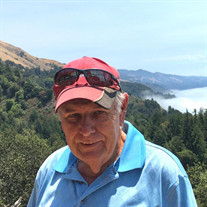 Ronald “Ron” Adais Bransteitter, 74, formerly of Odessa, Missouri, passed away on Wednesday, March 3, 2021 at the UT Southwestern University Hospital in Dallas, Texas. In November, Ron had successfully recovered from a surgery to remove cancer. However, while seeking rehabilitation therapy, he contracted COVID-19 and suffered from many COVID-19 related complications that ultimately ended his life. A private mass will be held at 8:00 a.m., on Saturday, March 13, 2021 the St. John LaLande Church, 805 NW R.D. Mize Rd., Blue Springs, MO, 64015. Services can be viewed virtually at https://www.facebook.com/stjohnlalande/. Burial will follow at the Greenton Cemetery in Odessa. In lieu of flowers, memorials are suggested to New Camaldoli Hermitage in Big Sur, California (https://www.contemplation.com) that was impacted by the 2020 wildfires. Memories of Ron and condolences for his family may be left at www.LedfordFamilyFH.com or on our Facebook Page. Arrangements entrusted to Ralph O. Jones Funeral Home, 306 S. 2nd Street, Odessa, MO, 64076, 816-633-5524. Ron was born in Warrensburg, Mo. on July 21, 1946 to Adais and Anna Bransteitter. They lived in the country near Blairstown, Mo., where his father farmed for a living. His father was a descendent of the Pennsylvania Dutch community. His grandparents, Samuel and Eva Bransteitter, had a farm in Hardin, Mo. The name Bransteitter is a Dutch word meaning “Keeper of the Fire.” His maternal grandparents, Pete and Margaret Roskop, immigrated to the US from St. Petersburg, Russia and settled in Denver, Colorado. Ron said his mother taught him to appreciate bird watching and red roses. His father taught him to hunt, fish, and live off the land and told him, “take care of the land and it will take care of you.” Ron graduated from Odessa High School in 1964. In 1967, he married Jean L. Sawyer and began working at General Motors in Kansas City. Ron and Jean had his only child, Ronda Bransteitter, in 1970. They were later divorced. In 1990, General Motors transferred Ron to Wichita Falls, Texas. He retired from General Motors in 1997 with 30 years of service and remained living in Texas. There, he enjoyed fishing at Lakes Arrowhead and Possum Kingdom. He loved meeting his buddies for the Texas Friday Night Lights Football Game at the enormous high school stadium just a few blocks from his home. Ron was a member of the Sacred Heart Catholic Church and a 3rd degree member of the Knights of Columbus in Wichita Falls, TX. Often Ron would return to Odessa, Mo. to visit his sister’s family, JoAnn and Charles Jr. Barker and their son, James Barker. He loved seeing James’ two young boys, Aaron and Cameron, and his wife, Andrea. Ron's niece, Joni Barker, passed away in 2000. Ron’s greatest passion throughout his life was fishing. He participated in and won numerous fishing tournaments. He kept meticulous logs of his fishing trips with hand-drawn lake maps and descriptions of water conditions, weather, time, bait used, and fish caught. And like all true fishermen, Ron admirably approached all of life’s difficult circumstances with patience and persistence. He also enjoyed taking pictures of deer, birds, and flowers. He had a deep appreciation for natural beauty. Ron and his daughter, Ronda, both shared a love for adventure and nature. In 2004, Ron and Ronda traveled together to Thailand and Singapore. They loved camping on the beachside cliffs of Big Sur, CA and hunting for ocean tumbled jade on the beach. Ron is survived by his daughter, Ronda Bransteitter of Beverly Hills, CA; his sister, JoAnn Barker and husband Charles of Odessa, MO; his nephew, James Barker and wife, Andrea, and two sons, Aaron and Cameron, of Odessa, MO. Ron was preceded in death by his parents and niece, Joni Barker.

Ronald &#8220;Ron&#8221; Adais Bransteitter, 74, formerly of Odessa, Missouri, passed away on Wednesday, March 3, 2021 at the UT Southwestern University Hospital in Dallas, Texas. In November, Ron had successfully recovered from a surgery to... View Obituary & Service Information

The family of Ronald Adais Bransteitter created this Life Tributes page to make it easy to share your memories.

Send flowers to the Bransteitter family.