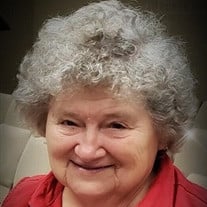 Romelle Rosalie (Armstrong) Hoffman, 82, of Napoleon, Missouri passed away on Monday, September 30, 2019 at St. Luke’s East Hospital in Lee’s Summit, MO. Funeral Service will take place at 12:00 p.m. on Saturday, October 5, 2019 at Ralph O. Jones Funeral Home, 306 S. 2nd St., Odessa, MO, 64076, 816-633-5524 with visitation starting two hours prior at 10:00 a.m. Burial will be in the Mt. Tabor Cemetery, Odessa, MO. Memorials are suggested to the Children’s Mercy Oncology Department, in memory of Joshua Rider, www.childrensmercy.org. Memories of Romelle and condolences for her family may be left at www.LedfordFamilyFH.com or on our Facebook Page. Romelle was born on December 6, 1936 in Camden, IL to Ercel Orin and Alberta May (Farrar) Armstrong. After graduating Green City High School in 1954, she was united in marriage later that year to Clifford Leon Hoffman on December 12th. For many years Romelle looked over children in her home while raising her own. She was also a Sunday School teacher for young children for many years. In 1980, when the hospital doors opened, Romelle worked as a housekeeper for St. Mary’s Hospital until 1988. After her second year of employment she received employee of the year. Romelle also cleaned houses and was a companion caregiver and friend to many others. Romelle was always generous with her time and everything she did, she did for her Lord and Savior. She was a member of the Long Branch Baptist Church. In addition to spending time with family and friends, Romelle enjoyed bowling and gardening flowers. Survivors include two children: Dennis Hoffman (wife Donna) of Columbia, MO, and Debbie Rider (husband Donald) of Odessa, MO; six grandchildren: Andrea, Ben, and Jeanna Hoffman, Tiffany and Tabitha Rider, and Taylor Kratz; three great grandchildren, Emma Jewel and Allie Rosalie Clemens, and Koda Gene Kratz; one brother, Milton Armstrong (wife Anita) of Kirksville, MO; and three sisters, Eunice Evans of Kansas City, MO, Marie Buckallew of Smithville, MO, and Martha Ward (husband Jerry) of Columbia, TN, and many nieces and nephews. In addition to her parents and husband, Romelle was preceded in death by three sisters, Virginia Cummings, Audrey Shumway and Juanita Thomas; two brothers, Frank and James Armstrong; and one grandson, Joshua Rider.

The family of Romelle Rosalie Hoffman created this Life Tributes page to make it easy to share your memories.

Send flowers to the Hoffman family.