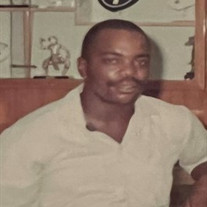 Robert Andrew Locke Jr. was born in Lexington, Missouri to Robert A. Locke, Sr., and Rhoda Jane Williams on March 20, 1942. He departed this life on Friday, March 25, 2022. He was 80 years old. He was the oldest of four siblings. Robert was a Vietnam War veteran and a longtime resident of Clovis, New Mexico, known as Bob. Before enlisting in the U.S. Air Force, he attended high school in Lexington, MO. He did most of his military touring in Asia, where he met his wife, Gimlai Locke, on an air force base in Thailand. They married on September 24, 1969, in Bangkok, Thailand, and together raised two children, Ratana and Robert (Trey). Robert served our country for 21 years while doing multiple tours in Asia, including the Vietnam War. He received many honors during his military career, such as the Air Force Commendation Medal with two oak leaf clusters and Vietnam Service Medal with eight oak leaf clusters. He retired from the Air Force with the rank of Technical Sergeant while working as a Munitions Systems Supervisor in 1985 at Cannon Air Force Base in Clovis, NM. After retirement from the military, he began a career as a lab technician at Eastern New Mexico University in Portales, NM, where he retired in 2002. Robert was known to be friendly, generous, caring, and could hold a conversation with everybody. He loved to watch Old Westerns and his Kansas City Chiefs football team. His father, Robert Andrew Locke Sr; His mother, Rhoda Jane Locke; and his sister Stella Louise Glasgow preceded him in death. Robert leaves to cherish his memory and celebrate his life are his wife, Gimlai Locke; his son, Robert (Trey) Andrew Locke III (Janine) of Houston, TX; his daughter, Ratana Locke of Lubbock, TX; his grandchild, Denim Andrew Locke; Brother Ronnie C. Locke of Lexington, Missouri; Sister, Rhonda R. Hardin (niece Brittne Hardin) of Fort Worth, Texas, nephews, nieces, and a host of friends. Visitation will be Friday, April 8, 2022 from 12:30 until 1:30 pm at Walker-Nadler-Fuller Funeral Home. A graveside service with Military Honors will be Friday, April 8, 2022 at 2:00 pm at the Missouri State Veterans Cemetery, Higginsville. Arrangements have been entrusted to Walker-Nadler-Fuller Funeral Home, 1720 South Street, Lexington, MO 64067, 660-259-2245.

Robert Andrew Locke Jr. was born in Lexington, Missouri to Robert A. Locke, Sr., and Rhoda Jane Williams on March 20, 1942. He departed this life on Friday, March 25, 2022. He was 80 years old. He was the oldest of four siblings. Robert was... View Obituary & Service Information

The family of Robert Andrew Locke, Jr. created this Life Tributes page to make it easy to share your memories.

Send flowers to the Locke family.