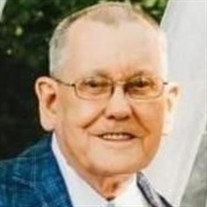 Richard Ronald Roland, 83, of Mayview, MO, passed away on Tuesday, March 8, 2022, at St. Luke’s Hospice House in Kansas City, Missouri. A visitation will be held from 2:00 p.m. to 4:00 p.m. on Sunday, March 13, 2022, at Calvary Baptist Church, 7995 Outer Road, Odessa, MO, 64076. A funeral service will be held at 9:30 a.m. on Monday, March 14, 2022, at the church. Interment with military honors will follow at Missouri Veterans Cemetery, 20109 Bus. Hwy 13, Higginsville, MO, 64037. Memorials are suggested to AM VETS or St. Jude Children’s Research Hospital. Memories of Richard and condolences for his family may be left at www.LedfordFamilyFH.com or on our Facebook Page. Richard was born on June 5, 1938, to Robert Lee and Dorothy Jean (Fry) Roland in Muscatine, IA. After graduating from Muscatine High School, he earned his Bachelor of Electronics and Business Administration from Drury University. On July 16, 1960, Richard was united in marriage to Joanne Kay Roland in Muscatine, IA. She preceded him in death. He enlisted in the United States Navy, serving until honorably discharged from the United States Reserves on January 1, 1997. Richard worked for Lucent Technologies in electronics. He was a member of Calvary Baptist Church and AM VETS. In addition to spending time with family and friends, Richard enjoyed being active with the church, tinkering with woodworking, and reading and watching westerns. Survivors include two daughters, Lisa Porter (Allen) of Springfield, MO and Shelley Conn (James) of Mayview, MO; four grandchildren, Evan Porter (Jennifer), Kristin Molacek (Jacob), Nicole Conn (Drew Helmke), and Nick Conn (Laura Empson); eight great grandchildren, Ellyana, Brylinn, Addison, Amia, Deacon, Elijah, Noah, and Josiah; a sister, Nancy Stolley; a brother in law, Jerry Durst of Dunnegan, MO; a brother and sister in law, Jim and Judy Hollenbeck of Bolivar, MO; and many relatives and friends. In addition to his wife and parents, Richard was preceded in death by a sister, Judy Jens.

The family of Richard Ronald Roland created this Life Tributes page to make it easy to share your memories.

Richard Ronald Roland, 83, of Mayview, MO, passed away on Tuesday,...

Send flowers to the Roland family.