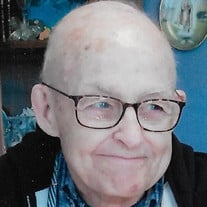 Paul Eugene Magruder, 91, of Odessa, Missouri passed away on Tuesday, September 22, 2020 at his home. A rosary will be recited at 9:30 a.m., Friday, September 25, 2020 at St. George Catholic Church, 202 W. Phillips St., Odessa, MO, 64076. A Mass of Christian Burial with Celebrant Father Bryan Amthor will begin at 10:00 a.m. on Friday, September 25, 2020 at the church. A Rite of Committal with Military Rites will follow at the Odessa Cemetery. Memorials are suggested to St. George Catholic Church. Memories of Paul and condolences for his family may be left on at www.LedfordFamilyFh.com or on our Facebook Page. Arrangements have been entrusted to Ralph O. Jones Funeral Home, 306 S. 2nd Street, Odessa, MO, 64076, 816-633-5524 Paul was born on April 2, 1929 in Kansas City, MO to Paul Edwin and Stella Mae (Keith) Magruder. He was raised by his mother and stepfather, James Mitchell. Paul attended Raytown High School until joining the United States Navy in 1945. He served his time on a submarine and earned the Victory Medal WWII. Paul was honorably discharged on February 27, 1948. On June 17, 1950 Paul was united in marriage to Bernadine Ann (Kaminski) in Fairway, KS. He worked as a Repeater Man Technician for Southwestern Bell Telephone from 1951 until retiring in 1982. Paul was a member of the CWA local, B Squares, and the St. George Catholic Church of Odessa, MO. Paul enjoyed spending time with family and friends. In addition to his wife, Bernadine of 70 years, survivors include two sons, Richard Magruder and wife Melody of Independence, MO, and Michael Magruder and wife Barbara of Odessa, MO; and three daughters, Patricia Pudenz and husband Mark of Odessa, MO, Sharon Thompson and husband Randall of Bolivar, MO, and Teresa Christeson of Odessa, MO; 10 grandchildren; 24 great grandchildren; 9 step great grandchildren; and one great great grandchild. Paul was preceded in death by his parents.

The family of Paul Eugene Magruder created this Life Tributes page to make it easy to share your memories.

Paul Eugene Magruder, 91, of Odessa, Missouri passed away on...

Send flowers to the Magruder family.