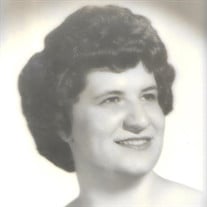 Ozina Mae “Peggy” (Terrell) Ford, 84, of Oak Grove, Missouri passed away July 05, 2021, at Country Club Care Center in Warrensburg, Missouri. A visitation will be held from 10:30 am to 11:30 am, Tuesday, July 13, 2021, at Church of Christ of Odessa, 210 N. 4th St, Odessa MO. A funeral service will begin at 11:30 am at the church. Interment with military honors will follow at 1:00 pm in the Missouri Veteran’s Cemetery, 20109 MO-13 Bus., Higginsville, MO 64037. Memorials are suggested to the family, in care of Bradley Ford, and may be left in care of the funeral home. Arrangements have been entrusted to Ralph O. Jones Funeral Home, 306 S. 2nd St., Odessa, MO, 64076, 816-633-5524. Memories of Peggy and condolences for her family may be left at www.LedfordFamilyFH.com or on our Facebook Page. Peggy was born February 15, 1937, in Danville, Missouri to Juanita (Terrell) Graham. After graduating from Carthage High School in 1955, she enlisted in the United States Navy on June 6, 1955, in Kansas City, MO. Peggy served as a Navy Nurse until honorably discharged on August 2, 1956. She worked as an LPN for various hospitals and nursing homes throughout her career. Peggy was a member of the Church of Christ of Odessa, American Legion, VFW Post 5675, and Knights of Pythias (Rebekahs). She served as past treasurer for the PTA. In addition to spending time with family and friends, Peggy enjoyed crocheting, sewing, and knitting. Peggy is survived by three children, Brad Ford of Oak Grove, MO, Lisa Edwards and husband, Alvin of Odessa, MO, and Deidre Cooper and husband, Manuel of Odessa, MO; a brother, Harold Laffon and wife, Cindy of Apache, OK; seven grandchildren; three great grandchildren; and many nieces, nephews, relatives, and friends. Peggy was preceded in death by her mother; a son, Dwayne Ford; and a brother Hubert Laffon. Pallbearers will be Christopher Ford, James Ford, Alvin Edwards, IV, Caleb Cooper, and Christian Cooper.

The family of Ozina "Peggy" Mae Ford created this Life Tributes page to make it easy to share your memories.

Send flowers to the Ford family.