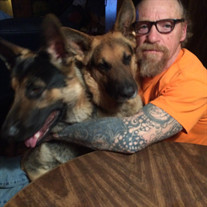 Michael Shane Sanders, 57 of Odessa, Missouri passed away on Sunday March 3, 2019. A visitation will be held from 12:00 p.m. to 1:00 p.m., Monday, March 11, 2019 at the Ralph O. Jones Funeral Home, 306 S. 2nd St., Odessa, MO, 64076. A funeral service will be held at 1:00 p.m., Monday, March 11, 2019 at the funeral home. Burial will be in the Greenton Cemetery. Memorials are suggested to the Victor Sanders Legal Fund in care of Terri Sanders. Memories of Michael and condolences for his family may be left at www.ralphojones.com or on our Facebook Page. Michael was born on June 23, 1961 in Kansas City, MO to Gerald Franklin Sanders and Shirley (Branson) Sanders. He received his diploma in 1998. Michael currently worked for Commercial Roofing as a Roof Installer. In addition to spending time with his family and friends, Michael enjoyed his dogs and motorcycles. Survivors include a daughter Miranda Shane Sanders; two brothers, Victor D. Sanders of Kingsville, MO and Gerald Wayne Sanders of Odessa, MO; a sister, Terri Lynn Sanders of Kansas City, MO and many nieces, nephews, great nieces, great nephews, great-great nieces and great-great nephews. In addition to his parents, Michael was preceded in death by two brothers, Chris Sanders and Jeff Stafford; and a sister, Sherry Zimmerman.

The family of Michael Shane Sanders created this Life Tributes page to make it easy to share your memories.

Michael Shane Sanders, 57 of Odessa, Missouri passed away on...

Send flowers to the Sanders family.