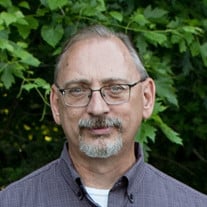 Michael "Mike" Duane McCoy passed away suddenly at home on July 27, 2021. Mike was born on January 20, 1961 to Davilee and Betty (Bear) McCoy in Carthage, Missouri. He was the fourth of five children. Mike graduated from Carthage High School in 1979, and earned his Bachelor's Degree in Parks and Recreation from Southwest Missouri State University in 1983. Mike worked at a children's home in Indiana, before moving to Lexington, Missouri, where he took a position with the Missouri Division of Family Services. Not long after, he then took the position of Director of Parks and Recreation in Lexington, which he held for several years. Mike began working for the Division of Family Services again in 1991, as a caseworker. Due to his love of computers, and knack for working on them, he eventually became a Client Support Technician, or simply "the computer guy", which is the position he remained in at the time of his passing, having worked for the state of Missouri for over 30 years. Upon moving to Lexington, he began attending the First Baptist Church where he met his future wife, Linda. Linda and Mike were married on November 08, 1991. Upon marrying Linda, Mike gained two children Sara and Willie Bell, and together they had a daughter, Annie McCoy. Mike was a loving husband, son, brother, father, "Papa", and friend. He was a very involved father, coaching little league ball for all three of his children while they were growing up, and volunteering with numerous activities that they were involved in. He attended more ball games, school plays and dance recitals than could possibly be counted, for his children and grandchildren alike. He loved his family deeply, and was always willing to tell anyone who would listen about what his adult kids were up to, or about something cute or funny one of his grandkids had done. He loved being "Papa" and was always there to wipe a tear, lend an ear, or a hand, and to support his family in any way he could. Mike was a lifelong Christian, and attended both the First Baptist Church of Lexington and the First Baptist Church of Higginsville, in recent years. He started the Children's Church program at the First Baptist Church in Lexington, and taught adult Sunday School there for 10 years. He was a true example of a Christian, as a man who loved and respected all people, and believed in the goodness of humanity. He was always willing to help anyone who needed it, without hesitation. His love for computers helped many people in the community, as he was constantly going to local businesses and homes to fix whatever computer problems had arisen, including the common "user error." He was also an assistant tennis coach for the Lexington High School girl's tennis team at the time of his death, and had been for over 15 years. During that time he coached many students, not just in tennis, but in life. He built relationships with their families and remained a person that many of them continued to call upon, for advice or to just play tennis, for many years post-graduation. Mike also loved bicycling and shared that love with many friends over the years, riding in the MS-150 numerous times. He enjoyed conversing with people from all walks of life, and learning from them, as he believed that you never stop learning and growing throughout your life. He had friends from all over, and was never more than a phone call away for anyone who needed a helping hand, or a listening ear. He was a man of many talents and skills, with a compassionate heart and love that will be felt by all who knew him for many years to come. Mike is survived by his wife, Linda, and mother-in-law, Joan Pence, both of the home. He is also survived by his children Sara (Aaron), Willie (Adrienne), and Annie (Chris); grandchildren Matthew, Allissa, Emma, James, Tyler, and Gracen; his parents Dave and Betty McCoy; siblings Debi Morgan, Karen (Greg) Maynard, Keith McCoy, and Cheryl (Jeff) Bryant, and many nieces, nephews, great-nieces and nephews, cousins, and friends. He was preceded in death by James Ellis, III; his grandparents; his father-in-law William Pence; and his granddaughter Sierra Bell. Visitation will be held at the First Baptist Church in Lexington, Missouri from 6-8pm on Saturday, July 31st. The funeral will be held in the same location at 1:30pm on Sunday, August 1st. The first 30 minutes of the visitation masks will be required, for those who feel more comfortable wearing a mask at this time. Services will be live streamed on Sunday via Facebook. We invite you to wear Chiefs gear or red, as Mike was an avid Chiefs fan and was so excited about the upcoming season. Memorial donations can be made to the Mike McCoy Girls Tennis Scholarship Fund, and either left at the services, or mailed to 1501 Lafayette St, Lexington, Missouri 64067.

Michael "Mike" Duane McCoy passed away suddenly at home on July 27, 2021. Mike was born on January 20, 1961 to Davilee and Betty (Bear) McCoy in Carthage, Missouri. He was the fourth of five children. Mike graduated from Carthage High School... View Obituary & Service Information

The family of Michael Duane McCoy created this Life Tributes page to make it easy to share your memories.

Send flowers to the McCoy family.