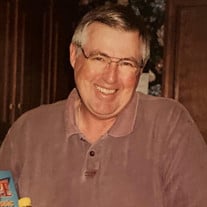 Michael Loren Hobbs, 72 of Centertown, Missouri passed away on Wednesday, March 16, 2022, at The Neighborhoods by Tiger Place in Columbia, MO. Visitation will be held from 11:30 a.m. to 12:30 p.m., Thursday, March 24, 2022, at the Ralph O. Jones Funeral Home, 306 S. 2nd St., Odessa, MO, 64076, 816-633-5524. A funeral service will follow at 12:30 p.m., Thursday, March 24, 2022, at the funeral home. Interment with Military Honors will be held at 2:00 p.m., Thursday, March 24, 2022, at the Missouri Veterans Cemetery in Higginsville, MO. Memorials are suggested to Central Missouri Hospice, 1001 Southwest Blvd., Suite A., Jefferson City, MO, 65109. Memories of Michael and condolences for his family may be left at www.LedfordFamilyFH.com or on our Facebook Page. Michael was born on April 14, 1949, in Odessa, MO to Loren Horace and Emma Elizabeth (Tye) Hobbs. He was a 1967 graduate of Odessa High School in Odessa, MO. On March 26, 1971, Michael was united in marriage to Melissa Jane Abney at the First Baptist Church in Odessa, MO. Michael was a veteran of the United States Army and was honorably discharged on February 9, 1971. He received his Bachelor of Science Degree in 1989 from Columbia College. Michael was a Contributions Supervisor for the State of Missouri. He was a member of the Southridge Baptist Church. In addition to spending time with his family and friends, Michael loved classic cars, tractors, and antique toys. He was an avid Chiefs and Royals fan, but most of all he loved spending time with his grandchildren. Michael is survived by his wife, Melissa Jane Hobbs of Centertown, MO; three children, Elizabeth Hobbs of Lee’s Summit, MO, Stacy Dixon and husband Mike of Waynesville, MO, and Michael D. Hobbs and wife Karen of Jefferson City, MO; seven grandchildren, Kathleen Sherwood, Nathan Danner, Ewan Sherwood, Michael K. Hobbs, Savannah Dixon, Colton Dixon, and Emily Hobbs; and a sister-in-law, Linda Hobbs of Kansas City, MO. In addition to his parents, Michael was preceded in death by a brother Doug Hobbs.

The family of Michael Loren Hobbs created this Life Tributes page to make it easy to share your memories.

Michael Loren Hobbs, 72 of Centertown, Missouri passed away on...

Send flowers to the Hobbs family.