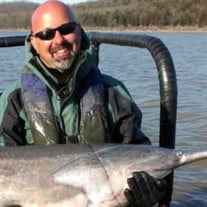 Michael “Mike” Aaron Bayless, 52, of Clinton, Missouri, formerly of Odessa, MO passed away on Sunday, April 18, 2021 in Clinton, MO. A memorial service will be held at 1:00 p.m., on Sunday, April 25, 2021 at Ralph O. Jones Funeral Home, 306 S. 2nd Street, Odessa, MO, 64076, 816-633-5524. Memorials are suggested to the family in care of Samuel Bayless. A charity will be chosen at a later date. Memories of Mike and condolences for his family may be left on our website at www.LedfordFamilyFh.com or on our Facebook Page. Mike was born on January 4, 1969 to David Callaway and Kathryn Susanne (Ware) Bayless in Kansas City, MO. After graduating from Odessa High School in 1987, he attended two years at Missouri State University in Springfield. Mike then transferred to Central Missouri State University and received his Bachelor’s Degree in Biology. Mike worked as a Fisheries Biologist for the Missouri Department of Conservation for over 25 years. In addition to spending time with family and friends, Mike enjoyed hunting, fishing, hiking, camping, and all things outdoors. Mike is survived by his parents, David and Kathryn Bayless of Warsaw, MO; a daughter, Elaina Alicia Hickox and husband, Luke of Great Falls, MT; three sons, Nathaniel Patrick Bayless of Clinton, MO, Samuel Joseph Bayless and wife, Shelby of Knob Noster, MO, Isaac Benjamin Bayless of Clinton, MO; two grandchildren, Gabriel Hickox and Fischer Bayless; and many relatives and friends. Mike was preceded in death by a sister, Kimberly Susanne Bayless.

The family of Michael "Mike" Aaron Bayless created this Life Tributes page to make it easy to share your memories.

Send flowers to the Bayless family.