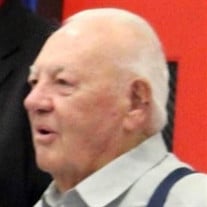 Meredith Franklin Stephenson, 90, our beloved father and friend, peacefully passed away on Friday, May 24, 2019. Visitation will be Tuesday, May 28, 2019 from 10:30 am until 12:00 pm at the Walker Nadler Fuller Funeral Home, Lexington. Memorial service will also be on Tuesday at the funeral home at 12:00 pm. Inurnment will be at Greenton Cemetery, Odessa. A Celebration of Life is planned for Tuesday, May 28, 2019 from 4:00 until 7:00 pm at the Lexington VFW. Memorials may be made to VFW Post 4052 or the Minutemen Athletic Booster Club (MABC). Memories and condolences may be left at www.ledfordfamilyfh.com. Meredith was born March 10, 1929 in Lexington to Patrick Charles and Florence Elsie (Snell) Stephenson. He graduated from Lexington High School in 1947 and earned an Associate’s Degree from Wentworth Military Academy. He then enlisted in the United States Navy, serving on the USS New Jersey during the Korean War. Meredith married Helen Jo Barker on November 15, 1957, she preceded him in death on September 2, 2014. He owned and operated Pat’s Boats and Motors for 47 years. Meredith was a lifetime member of VFW Post 4052 where he served as a two time Post Commander. He enjoyed fishing, hunting and was a sports fanatic. He was a Chiefs season ticket holder since 1963 and a Mizzou season ticket holder for over 50 years. Meredith is survived by his sons, Wendell Stephenson and wife Laurie of Lexington, Billy Stephenson and wife Barb of Columbia, Missouri and Brad Stephenson and wife Michelle of Prairie Village, Kansas; brother, Donald Stephenson and wife Elaine of Gilbert, Arizona; grandchildren, Austin and wife Lauren, Garrett and wife Spencer, Collin, Carrie and Will, Morgan, Erin, Allie, Tucker and Colby; and great grandchildren, Madelyn, Sophia and Colter. He was preceded in death by his parents; his wife; and brother, Patrick Stephenson, Jr.

Meredith Franklin Stephenson, 90, our beloved father and friend, peacefully passed away on Friday, May 24, 2019. Visitation will be Tuesday, May 28, 2019 from 10:30 am until 12:00 pm at the Walker Nadler Fuller Funeral Home, Lexington. Memorial... View Obituary & Service Information

The family of Meredith Franklin Stephenson created this Life Tributes page to make it easy to share your memories.

Send flowers to the Stephenson family.