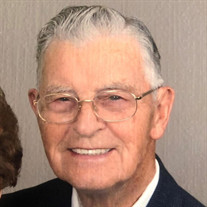 Melvin Francis Montgomery, 91, of Lexington, Missouri, passed away peacefully on April 2, 2022, with family by his side. Melvin was born January 29, 1931, to Joseph T. and Mary Leola (Hagan) Montgomery in Monroe City, Missouri. He was raised in a small parish community in Indian Creek, Missouri, known as Swinkey and graduated from St. Stephen’s High School. He married Mary Anne Montgomery on January 26, 1953, at St. Stephen’s Church. Shortly thereafter, he reported to Fort Lewis, Washington, for overseas assignment in the Korean War where he served in a construction battalion. Sailing home at the close of the war, he remembered seeing “the prettiest site in the world” when his ship passed the Golden Gate Bridge. After the war, Mary and Melvin settled into farming and raising their five children. In 1966, they moved to Lexington, Missouri, where Melvin worked as a machinist for Armco Steel and later for Schultz Tool and Die. Melvin’s life was defined by service both to his family and his community. He was a member of the Knights of Columbus, a 25-year member of VFW Post #4052 and served in the Honor Guard. He was a lifelong parishioner at Immaculate Conception Catholic Church where he served as an Extraordinary Minister of Holy Communion and Adorer. He also started the coffee most mornings at the Margaret Gray Center and delivered countless Meals on Wheels to Lexington’s elderly. Melvin is survived by his children, Paul (Cheryl) Montgomery of Lexington; Lynn Montgomery of Lakeview, Arkansas; Lesa (Sam) Santoro of Kansas City; David (Lesli) Montgomery of Greenville, South Carolina, and Sheila (Stephen Johnson) Montgomery of Kansas City. He is also survived by eleven grandchildren and nine great-grandchildren. He is preceded in death by his wife, Mary Anne, and siblings Rita Jo, Carolyn, Dorothy, John, and Charles. A visitation will be held Thursday, April 7, from 6-8pm at Walker-Nadler-Fuller Funeral Home, 1720 S. St., Lexington, MO, 64067, 660-259-2245. Rosary will be held at 8am, Friday, April 8, 2022, at the Immaculate Conception Catholic Church, 107 N. 18th St., Lexington, MO, 64067. Mass of Christian Burial will follow at 8:30 am at Immaculate Conception Catholic Church. Rite of Committal with military honors will be held at 10am at the Missouri Veterans Cemetery in Higginsville, Missouri. In lieu of flowers, memorials can be made to Immaculate Conception Catholic Church of Lexington, Missouri, or Margaret Gray Center of Lexington, Missouri. The family wishes to thank Vonda Love and her family for supporting Melvin in his final year.

Melvin Francis Montgomery, 91, of Lexington, Missouri, passed away peacefully on April 2, 2022, with family by his side. Melvin was born January 29, 1931, to Joseph T. and Mary Leola (Hagan) Montgomery in Monroe City, Missouri. He was raised... View Obituary & Service Information

The family of Melvin Francis Montgomery created this Life Tributes page to make it easy to share your memories.

Send flowers to the Montgomery family.