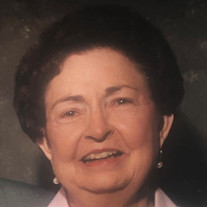 Mary Anne Montgomery, 90, of Lexington, Missouri, passed away at her home on December 31, 2021, with family by her side. Mary was born December 23, 1931, to Paul and Louise Evans in Vandalia, Missouri. She was raised on a farm with her sister, Wanda, and brothers, Jack and Bill. She excelled in academics and became valedictorian of her graduating class from Monroe City High School in 1949. Following graduation, she was employed for five years at Monroe City Bank. During this time, she began dating Melvin Montgomery of Indian Creek, and the two were married on January 26, 1953, at St. Stephen's Church in Indian Creek. Less than two weeks later, Pvt. Montgomery reported to Fort Lewis, Washington for overseas assignment in the Korean War. After the war, Mary and Melvin settled into farming and raising their five children. In 1966, they moved to Lexington, Missouri. Mary returned to work at Bank Midwest in 1978 and retired in 2003. Her hobbies included gardening and reading. She received "Yard of the Month" by the Lexington Garden Club in 2013 and again in 2018. Mary is survived by her husband, Melvin, and children, Paul (Cheryl) Montgomery of Lexington; Lynn Montgomery of Lakeview, Arkansas; Lesa (Sam) Santoro of Kansas City; David (Lesli) Montgomery of Greenville, South Carolina, and Sheila (Stephen Johnson) Montgomery of Kansas City. She is also survived by eleven grandchildren and nine great-grandchildren. A brief service will be held at 1 p.m. on Thursday, January 6, at the Missouri Veterans Cemetery in Higginsville, Missouri. In lieu of flowers, memorials can be made to Immaculate Conception Catholic Church of Lexington, Missouri, or Margaret Gray Center of Lexington, Missouri. The family wishes to thank Vonda Love, Preferred Hospice, and Amy's Loving Care for supporting Mary in her final months.

Mary Anne Montgomery, 90, of Lexington, Missouri, passed away at her home on December 31, 2021, with family by her side. Mary was born December 23, 1931, to Paul and Louise Evans in Vandalia, Missouri. She was raised on a farm with her sister,... View Obituary & Service Information

The family of Mary Anne Montgomery created this Life Tributes page to make it easy to share your memories.

Send flowers to the Montgomery family.