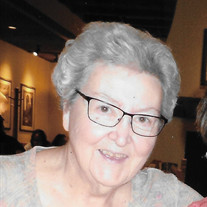 Mary Ruth (Hart) Flynn Ruth Flynn (83) of Wellington, Missouri passed away Friday, January 22, 2021 at Shirkey Nursing and Rehabilitation Center, Richmond. Mass of Christian Burial will be at 11:00 am, Friday, January 29, 2021 at St. George Catholic Church, Odessa. Visitation will also be on Friday at the church from 9:00 am until 11:00 am. The Rosary will be recited at 8:30 am. Burial will be in the Wellington City Cemetery. Memorials may be made to the Wellington Napoleon Kids First Foundation for the benefit of early childhood education. Memories and condolences may be left at www.LedfordFamilyfh.com. Arrangements have been entrusted to Walker-Nadler-Fuller Funeral Home, 1720 South Street, Lexington, MO 64067, 660-259-2245. Ruth was born in Prathersville, Missouri, the youngest of three daughters to William and Juanita (Writesman) Hart. She married Cecil Lee Flynn in 1959 and together they raised a family of six children and worked long careers as public educators. She was preceded in death by her husband Cec, her mother and father, her sister Betty Porter, her infant daughter Sally and her father and mother in-law, Joe and Rowena Flynn. Ruth is survived by her sister Patricia Lamb of Excelsior Springs, her brother-in-law and sister-in-law Clifford and Charlene Flynn of Mayview, her son Paul Ellensohn (Sherry) of Wellington, her daughter Kate Root of Odessa, her daughter Kelly Geringer (Jack) of Wellington, her son Patrick Flynn of Kansas City, her daughter Molly Flynn (Debbie) of Blue Springs, and her daughter Marti Flynn (Jim) of Wellington; as well as six grandchildren; Eric Ellensohn (Candace), Colbert Root (Brittany), Amanda Root-Vavricek (Andrew), Joe Geringer, Sam Geringer and Allison Geringer (Reggie) and three great-grandchildren, Kaylin and Ayden Ellensohn and Corrina Root. She was loved and will be missed by a great many cousins, nieces, nephews, friends, neighbors, and former colleagues. Ruth was a music and kindergarten teacher. She also worked with Missouri’s Head Start program and Parents as Teachers. She finished her career as the Director of Early Childhood with the Missouri Department of Elementary and Secondary Education. She was known throughout the state for her work to improve early childhood education. Ruth was a long and faithful member of the True Blue Buddies, college friends who met in Warrensburg, Missouri and carried a love and commitment for each other through many years of raising families and service. She belonged to the St. George Catholic Church in Odessa and the Lafayette-Lexington chapter of the Daughters of the American Revolution. She had many good friendships through her involvement with various groups, including TOPS, book clubs, quilting clubs and gardening clubs. Mom was a lover of nature, music, good books and bad television. She was a master crafter, great cook, cookbook author, seamstress, and gardener. Her cookbook, quilts, and crafting projects are cherished parts of many households. She was a quiet, but determined fighter for equality and peace.

The family of Mary Ruth Flynn created this Life Tributes page to make it easy to share your memories.

Send flowers to the Flynn family.