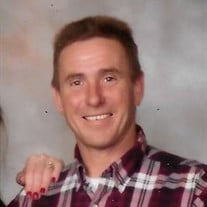 Marvin Randal Hammond, 59, lifelong Union man, carpenter and outlaw, of Wellington passed away September 17, 2019 at his home. Visitation will be Saturday, September 21 from 1:00 until 2:00 pm at Walker-Nadler-Fuller Funeral Home, Lexington. A funeral service will also be on Saturday at the funeral home at 2:00 pm. Burial will be at Lexington Memory Gardens Cemetery. Memorials may be made to an education fund for his grandchildren in care of Mariah Hammond. Memories and condolences may be left at www.LedfordFamilyFH.com. The way he died is how he lived. He wrote his own rules. He fought authority, he trekked his own path. Marvin had a sly grin, prurient sense of humor and a knack for making things go. He could fix the engine in a ’98 Chevy with a mouth full of curse words and a zip tie. His calloused, warm hands held four babies, and later, three grandbabies. His shoulders carried them across carnival grounds, to football games and more. His feet, blistered and tired, led him to work for over 40 years, feeding his family and his passion. Marvin loved tootsie rolls, Missouri river fishing, ice cold Pepsi, conspiracy theories and bubble baths. Not necessarily in that order. He hated cats, the government and game wardens. Not necessarily in that order. Marvin wanted it known that he died as a result of raising hell for nearly 60 years. Marvin was born September 6, 1960 in Carrollton, Missouri to Lewis and Janice (Markley) Hammond. He graduated from Wellington Napoleon High School in 1978. He married Roxanna Wilson on May 8, 1998 in Branson, Missouri. Marvin was a member of Local 61 Carpenter’s Union, Kansas City, Missouri and the Assembly of God Church, Lexington. Marvin is survived by his mother, Janice of Wellington; his wife, Roxanna of Lexington; his children, Anna Hammond and fiancé Tyler Summers of Wellington, Quinton Hammond of Wellington, Mariah Hammond and fiancé Daniel Driscoll of Napoleon and Spencer Hammond of Lexington; grandchildren, Paisley Summers, Savannah Summers and Marshall Driscoll; and sister Loria Schwermer of Wellington. He was preceded in death by his father, Lewis and his sister Edith Hammond.

The family of Marvin Randal Hammond created this Life Tributes page to make it easy to share your memories.

Send flowers to the Hammond family.