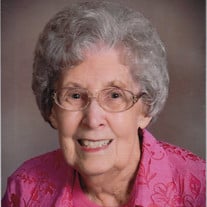 Mabel Frances (Robbins) Smith, 93, of Odessa, Missouri passed away on Thursday, January 23, 2020, at St. Mary’s Medical Center in Blue Springs, MO. Visitation will be held from 5:00 p.m. to 7:00 p.m. on Thursday, January 30, 2020, at the Ralph O. Jones Funeral Home 306 South Second Street, Odessa, MO, 64076, 816-633-5524. Funeral service will be held at 10:00 a.m. on Friday, January 31, 2020, at the First United Methodist Church of Odessa, 301 South First Street, Odessa, MO. Burial will be in the Odessa Cemetery. In lieu of flowers, memorials are suggested to the First United Methodist Church of Odessa or the Odessa R-7 Public Foundation. Memories of Mabel and condolences for her family may be left at www.LedfordFamilyFh.com or on our Facebook Page. Mabel was born on June 24, 1926, in Warrensburg, MO to Manning and Almeda (White) Robbins. After she graduated from Farmer’s High School, she attended Central Missouri State College and earned her Bachelor’s Degree in Education. On June 4, 1948, Mabel was united in marriage to C.D. Smith at her parents’ house near Warrensburg, MO. He preceded her in death in 2011. Mabel taught second grade at McQuerry Elementary School for the Odessa R-7 School District for 28 years, retiring in 1987. She was a recipient of the Odessa R-7 Public Foundation Hall of Fame Award for the classes of 2004-2005 year. She was a member of Missouri Retired Teachers Association, Missouri State Teachers Association, Delta Kappa Gamma, First United Methodist Church of Odessa, and the United Methodist Women. In addition to spending time with family and friends, Mabel enjoyed sewing, quilting and singing in the church choir. Survivors include four children, Roger Smith and wife Karen of Westerville, OH, Jane Smith and husband Michael of Crestwood, KY, Wayne Smith and wife Susie of Odessa, MO, and Linda Smith and wife Paula Labart of Weatherby Lake, MO; nine grandchildren; and fifteen great grandchildren. In addition to her husband, C.D. Smith, Mabel was preceded in death by her parents and sister, Helen White.

The family of Mabel Francis Smith created this Life Tributes page to make it easy to share your memories.

Send flowers to the Smith family.