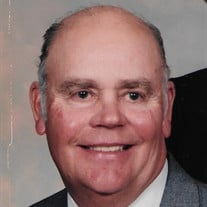 L. Bernard Schreiner, 90, went to be with the Lord on July 12, 2021. Bernard was born to Edward A. and Anna M. Boland Schreiner on April 24, 1931 in Norborne, Missouri. He attended school in Norborne until his family moved to Lexington, Missouri in 1946. Upon graduation from Lexington High School in 1949, he enlisted in the U.S. Air Force and served until he was honorably discharged in 1952. At that time, he began his longtime farming occupation. He married Agnes M. Hartmann at the St. Pius X Church in Moberly, Missouri on October 6, 1956. Bernard was a member of the Immaculate Conception Church and the Knights of Columbus. In addition to being in the U.S. Air Force and farming, most of his life, he worked at the Lake City Ammunition Plant and in maintenance for the Lexington School District until he retired. He is survived by his wife, Agnes, of the home; son, Dale of Lexington; and daughter, Karen (Scott) Allen of Southlake, Texas; granddaughters, Devin Schreiner of Lenexa, Kansas, Samantha Schreiner Fish of Kansas City, Missouri and Kristen Allen of Southlake, Texas; grandsons, Brett Allen of Southlake, Texas and Shea Schreiner of Overland Park, Kansas; great grandson, Rue Chang of Lenexa, Kansas; and great granddaughter, Lily Fish of Kansas City, Missouri. In addition, Bernard is survived by one brother, Francis Schreiner of Lincoln, Illinois. He was preceded in death by his son, Kevin; parents; two sisters and one brother, Rosemary Dobson, Charles Schreiner and Angela Ann Davis. There will be no visitation. The funeral Mass will take place at Immaculate Conception Catholic Church, Lexington on Friday, August 20, 2021 at 10:00 am with Father Jayson Becker officiating. The Rosary will be said prior to the service at 9:30 am. Inurnment will follow at the Veteran's Cemetery in Higginsville, Missouri. Memorials may be made to the Knights of Columbus or the Lexington Senior Center. Memories and condolences may be left at www.LedfordFamilyFH.com. Arrangements have been entrusted to Walker-Nadler-Fuller Funeral Home, 1720 South Street, Lexington, MO 64067, 660-259-2245.

L. Bernard Schreiner, 90, went to be with the Lord on July 12, 2021. Bernard was born to Edward A. and Anna M. Boland Schreiner on April 24, 1931 in Norborne, Missouri. He attended school in Norborne until his family moved to Lexington, Missouri... View Obituary & Service Information

The family of Louis Bernard Schreiner created this Life Tributes page to make it easy to share your memories.

Send flowers to the Schreiner family.