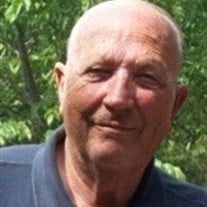 Lilburn “Eddie” Bertz, 79, passed away August 23, 2020 at his home surrounded by his loving family. Eddie was born February 8, 1941 from Lilburn “Shote” Bertz and Audra Windsor Bertz and was a lifelong resident of Odessa. Eddie was united in marriage to Annetta Thompson on May 4, 1966 and was the proud father of two sons Shawn (Glenda) of Warsaw, Missouri and Brandon (Jennifer) of Minneapolis, Minnesota. He is also survived by granddaughter Amber Wright (Tim) of Odessa, great-granddaughter Quinn, grandson Alex Higginbotham of Kansas City, MO, sister Carolyn Crabtree (Robert) of Odessa and numerous nieces and nephews who continue to celebrate his presence in their lives.

Eddie graduated in 1959 from Odessa High School and later entered the Army Reserves stationed in Fort Leonard Wood, MO where he served 6 years and earned the rank of Staff Sergeant and was awarded Outstanding Reservist in 1965. In 1962, Eddie began working for the Odessa Post Office where he began a lifelong career spanning 36 years in a variety of roles and 23 years serving as Postmaster, retiring in 1998. During his time as Postmaster, he oversaw numerous technological upgrades and mail stream innovations. Eddie was a serving member of Mount Tabor UMC and loved being in the presence of his church family. He was an avid quail hunter, enjoyed fishing, gardening, and watching his son Shawn perform at local country music shows. However, his proudest accomplishment was caring for his family whom he loved very much. He will be remembered for his quick wit, exaggerated story-telling, and strong devotion to his family.