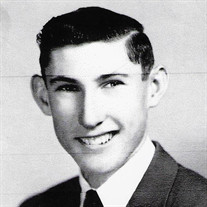 Lester Lee Redinger, 87, of Bates City, MO passed away on Monday, February 15, 2021 at the Country Oak Village in Grain Valley, MO. Private family services with Burial in Concord Cemetery. Memorials are suggested to the Mount Hope Masonic Lodge 476 in Odessa, MO. Memories of Lester and condolences for his family may be left at www.LedfordFamilyFH.com or on our Facebook Page. Arrangements have been entrusted to the Ralph O. Jones Funeral Home, 306 S. 2nd St., Odessa, MO, 64076, 816-633-5524. Lester was born on October 11, 1933 in Napoleon, MO to George and Alma Redinger. He graduated from Buckner High School in Buckner, MO. On April 10, 1955 he married Barbara Fern Ailor in Odessa. She preceded him in death on July 28, 2012. Lester worked for Sears and Roebuck as an Assistant Display Manager for 40 plus years before retiring. He also owned Bates City Antiques. Lester is a member of the Napoleon United Methodist Church in Napoleon, MO and the Mount Hope Masonic Lodge 476 in Odessa. In addition to spending time with family and friends, Lester enjoyed going to auctions and farming. Survivors include a son, Dwayne Redinger and wife Marilyn of Bates City, MO; four grandchildren, Valerie Ouderkirk, Tara Liebeck, Devlin Rice and Gavin Rice; three great-grandchildren, Kate Addie and Claire; and a sister, Alice Jacobs. In addition to his parents and wife, Lester was preceded in death by a daughter, Dianne Rice.

The family of Lester Lee Redinger created this Life Tributes page to make it easy to share your memories.

Send flowers to the Redinger family.