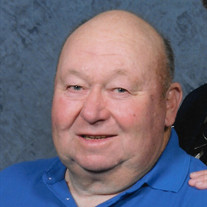 Leland Hubert Van Meter, 84, of Odessa, Missouri passed away on March 1, 2020 at St. Joseph Medical Center in Kansas City, MO. Visitation will be held from 12:00 p.m. to 1:00 p.m., Wednesday, March 4, 2020 at the Ralph O. Jones Funeral Home, 306 S. 2nd Street, Odessa, MO 64076, 816-633-5524. Funeral service will be held at 1:00 p.m. at the funeral home. Burial will be at the Odessa Cemetery. Memorials are suggested to the Odessa Senior Center. Memories of Leland and condolences for his family may be left at www.LedfordFamilyFh.com or on our Facebook Page. Leland was born on December 11, 1935 at Research Medical Hospital in Kansas City, MO to Hubert and Evelyn (Bird) Van Meter. The first two years of his life he lived in Richmond, MO until his parents bought a farm south of Odessa, MO. He was baptized on June 5, 1949 at the First Baptist Church of Odessa. He attended early education at Starr School and later graduated from Odessa High School in 1953. In 1954 Leland went to California to run a combine for his uncle, John Bird. He was part of a fleet of 12 combines, harvesting from the Mexican border to the Canadian border. He returned once more in 1955. In 1956 Leland’s father bought a combine, so he chose to stay home and do custom harvesting, as well as his own. In 1959 he bought a Ford truck and hauled water to others in the area. After meeting Bonita Evans in August 1961, they decided to unite in marriage on March 10, 1962 in Odessa, MO. They welcomed a son, Brian, in 1969. Over the years, Leland continued to row crop farming along with raising cattle and hogs through 2002. He served as a board member on the USDA Association Committee for Lafayette County, Odessa Rural Fire Board, Missouri Farmers Association, Lafayette County Cattleman Association and served as a Central Co-Op Director. He was a member of the Show-Me Motorcycle Club and the Show-Me Allegro Club. In addition to spending time with friends and family, Leland enjoyed traveling the United States and Canada by motorcycle and motor home. He loved old country music and Saturday night dancing. In addition to his wife, Leland is survived by one son, Brian Hubert Van Meter of Odessa, MO; and four nieces and their husbands, Jamie and Virgil Pointer, Judy and Terry Wilson, Jacque and Greg Henning, and Jenny and Michael Spencer. Leland was preceded in death by his parents, and one sister, Joyce Gray.

The family of Leland Hubert Van Meter created this Life Tributes page to make it easy to share your memories.