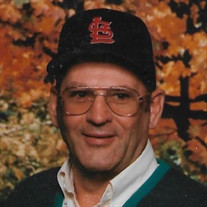 Lee Wayne Turner, 73, of Odessa, Missouri passed away on Friday, November 13, 2020 at the VA Medical Center in Kansas City, MO. Lee's family will host a Celebration of Life at 11:00 a.m., Saturday, May 29, 2021 at the Community of Christ Church, 515 S. First Street, Odessa, MO, 64076. An inurnment with Military Honors will be held at 12:00 p.m. at the Concord Cemetery in Bates City, MO. A light luncheon will follow at the Concord Fellowship Hall. Memorials are suggested to the AM Vets and can be left in care of the Funeral Home. Arrangements have been entrusted to Ralph O. Jones Funeral Home, 306 S. 2nd Street, Odessa, MO, 64076, 816-633-5524. Memories of Lee and condolences for his family may be left at www.LedfordFamilyFh.com or on our Facebook Page. Lee was born on November 22, 1946 in Bates City, MO to George Evan and Chloie May (Eldred) Turner. He graduated 1964 from Odessa High School. On December 13, 1967 Lee enlisted into the United States Army, serving until honorably discharged on August 12, 1970. He retired from Armco Steel in 2001 after 33 years of service. On July 15, 1971 he married Lila "Joyce" Dillon in Odessa, MO. Lee was a member of the Odessa Restoration Branch. In addition to spending time with family and friends, Lee enjoyed fishing. Lee is survived by his wife, Joyce Turner of Odessa, MO; three sons, Dr. Marty Turner, M.D. (Melanie) of Derby, KS, Greg Turner (Shannon) of Austin, TX, and David Turner (Mari) of Haysville, KS; six grandchildren, Katrina, Danielle, Asher, Nathan, Kaylee, and Kamden Turner; two brothers, Marion Turner (Velva) of Odessa, MO and Roy Gene Turner (Joan) of Independence, MO; one sister, Wanda Dyer (Ray) of Odessa; and many nieces and nephews. In addition to his parents, Lee was preceded in death by two brothers, Burton and George B. Turner; one sister, Golda Umstattd; and one sister-in-law, Delores Turner of Bates City, MO.

Lee Wayne Turner, 73, of Odessa, Missouri passed away on Friday, November 13, 2020 at the VA Medical Center in Kansas City, MO. Lee's family will host a Celebration of Life at 11:00 a.m., Saturday, May 29, 2021 at the Community of Christ Church,... View Obituary & Service Information

The family of Lee Wayne Turner created this Life Tributes page to make it easy to share your memories.

Lee Wayne Turner, 73, of Odessa, Missouri passed away on Friday,...

Send flowers to the Turner family.