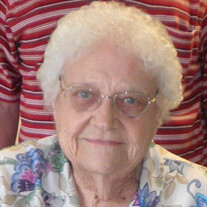 Laura Belle (Morgan) Filler, 96 of Odessa, Missouri passed away on Tuesday, February 22, 2022, at the New Haven Living Center in Odessa. Visitation will be held from 12:00 p.m. to 1:00 p.m., Friday, March 4, 2022, at the Ralph O. Jones Funeral Home, 306 S. 2nd St., Odessa, MO, 64076, 660-259-2245. A funeral service will follow at 1:00 p.m., Friday, March 4, 2022, at the funeral home. Interment will be in the Odessa Cemetery. Memorials are suggested to the Salvation Army. Memories of Laura and condolences for her family may be left at www.LedfordFamilyFH.com or on our Facebook Page. Laura was born on April 8, 1925, in Odessa, MO to Jesse Franklin and Nellie Mae (White) Morgan. She graduated from Odessa High School. After high school, Laura worked for Lake City Ammunitions during the war. On August 3, 1946, Laura was united in marriage to John M. Filler in Kansas City, Kansas. She was Baptized in 1939 as a Christian. After getting married, Laura became a homemaker and worked on the family farm. In addition to spending time with family and friends, she loved cooking Sunday dinners, playing cards and bingo, and going to the lake fishing. Survivors include a nephew, Jerry Johnson and wife Carolyn of Odessa, and a niece, Sue Rinne and husband Garret of Blue Springs, MO; many great-nieces and great-nephews; as well as many extended family members and friends. In addition to her parents and husband, Laura was preceded in death by two sisters, Kathryn M. Johnson, Imojean Flannery: and three brothers, Charles “Charlie” L. Morgan, Lorain “Cotton” L. Morgan, and Louis “Ick” F. Morgan.

The family of Laura Belle Filler created this Life Tributes page to make it easy to share your memories.

Send flowers to the Filler family.