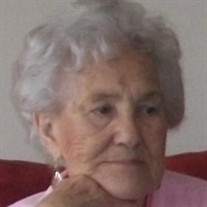 June LaRoy (Firkins) Dyer, 95, of Blue Springs, Missouri, formerly of Odessa, MO, passed away at her daughter’s home in Independence, MO on Monday, August 2, 2021. A visitation will be held from 11:00 a.m. to 12:00 p.m. on Saturday, August 7, 2021, at the Odessa Community of Christ Church, 515 S 1st St, Odessa, MO, 64076. A funeral service will be held at 12:00 p.m. at the church. A private family interment will be in the Mound Grove Cemetery, 1818 N River Blvd, Independence, MO 64050. Arrangements entrusted to Ralph O. Jones Funeral Home, 306 S. 2nd Street, Odessa, MO, 64076, 816-633-5524. Memories of June and condolences for her family may be left on our website at www.LedfordFamilyFH.com or on our Facebook Page. June was born on June 4, 1926, to Virgil and Mary Nina (Lewis) Firkins in Nebraska. She graduated from Hall Memorial High School in 1944 in Buckner, MO and in 1984 she received her business degree from Hamilton Business College at the age of 58. June worked as a secretary for the Dyer Communication in Odessa, MO. She was united in marriage to John David Dyer, Jr. in Odessa, MO. June was a member of the Odessa Community of Christ Church and Shaw Club. Her love of Our Heavenly Father was extremely important to her. In addition to spending time with family and friends, she enjoyed playing the piano, journaling her many blessings nightly, tending to her flowers, keeping a clean house, reading, and wood carving. In addition to her husband, John, survivors include two sons, Tracy Dyer (Sharon) of Odessa, MO, Robert Dyer (Kimberlyn) of Levasy, MO, a daughter, Mary Dawn Dickinson (Bill) of Independence, MO; a sister, Mary Lou Dyer of Weatherby, MO; two brothers, Ray Firkins (Minnie Lee), and Harold Firkins, all of Independence, MO; 10 grandchildren; 15 great grandchildren; one great-great grandchild; and many nieces, nephews, relatives, and friends. In addition to her parents, June was preceded in death by two sisters, Loval Dyer, and Carolee Corn; and a great grandson, Aaron Markarian.

The family of June LaRoy (Firkins) Dyer created this Life Tributes page to make it easy to share your memories.

Send flowers to the Dyer family.