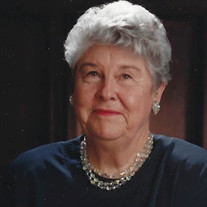 Joyce (Day) Baker, a pioneering businesswoman and member of the Greatest Generation, died Feb. 21, in an Arlington, Texas hospital after a brief illness. She was 95. Services will be at 11 a.m. Saturday, March 14, 2020 at the Ralph O. Jones Funeral Home, 306 S. Second St., Odessa, Mo 64076, 816-633-5524. She will be interred in a private service at Greenton Cemetery. In lieu of flowers, memorials may be made to the Odessa R-VII Public Foundation, 701 S. Third St., Odessa, Mo.64076, or to the Greenton Cemetery, 9679 Greenton Road, Odessa, Mo. Joyce was a devoted daughter, wife, mother and grandmother. She was born Oct. 24, 1924, in St. Joseph, Missouri, to M.B. “Pete” Day and Bertha Prock Day. Growing up, Joyce lived in several Missouri towns as her family moved around during the Depression, but her teenage years were spent in Bates City and Oak Grove, where she graduated from high school in 1942. She earned a degree from Central Missouri State Teachers College in 1945. She married her high school sweetheart, A.L. “Roy” Baker on Oct. 15, 1945 after he returned home from serving on a submarine in the South Pacific during World War II. The two met years earlier on a hayride. For Joyce, Roy was her “first love - and only love.” At a time when many women stayed at home, Joyce worked alongside her father and husband as a bookkeeper and manager at Day Chevrolet, a business Pete Day moved from Oak Grove to Odessa, and at Day-Baker Buses, which her father ran with his new son-in-law. Still, Joyce found time to raise a family. She and Roy had two sons - Brad Benton Baker in 1952, and Max Berkley Baker, in 1955. What they taught their children helped Brad succeed as a lawyer and district attorney, and Max as a newspaper reporter and editor. In the 1980s, Roy and Joyce sold the Chevrolet dealership and shut down the school bus business. Joyce went on to become a real estate broker. She continued to live in Odessa after Roy’s death in 1988, but eventually moved to their home at the Lake of the Ozarks. While at the lake, she served as a school aide for the Camdenton County School District and as a business mentor through SCORE. She also volunteered and painted sets for the Sunrise Beach Little Theater. Brad preceded her in death in 1998. In 2014, Joyce moved to Arlington, Texas, to be closer to her son, his wife, Sandra, and her two grandchildren, Benton and Johanna. A natural born storyteller, “Miss Joyce” became a favorite in the communities where she lived. She also became a Texas Rangers fan. She reveled in the Kansas City Chiefs 2020 Super Bowl victory. Still, over the last few years, as she missed Roy more and her patience wore thin over her aches and pains, Joyce would complain she had lived too long. But she fought until the end, and we’re glad that she did. Joyce is survived by her son, Max Baker and his wife, Sandra, of Arlington, Texas; her grandson Benton Baker and his wife, Kagan, of Dallas; her granddaughter Johanna Baker of Seattle; two sisters-in-law; two nephews and a niece.

Joyce (Day) Baker, a pioneering businesswoman and member of the Greatest Generation, died Feb. 21, in an Arlington, Texas hospital after a brief illness. She was 95. Services will be at 11 a.m. Saturday, March 14, 2020 at the Ralph O. Jones... View Obituary & Service Information

The family of Joyce Baker created this Life Tributes page to make it easy to share your memories.

Joyce (Day) Baker, a pioneering businesswoman and member of the...

Send flowers to the Baker family.