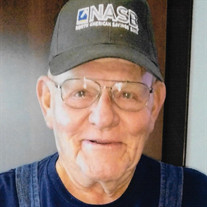 John Madison Zullig, 81, of Odessa, Missouri passed away on Monday, April 29, 2019 at Parkway Senior Living Center in Blue Springs, Missouri surrounded by family. A visitation will be held from 6:00 p.m. to 8:00 p.m., Friday, May 3, 2019 at the First Baptist Church, 100 W. OO Hwy, Odessa, MO, 64076. A Celebration of Life will be held at 11:00 a.m., Saturday, May 4, 2019 at the church. Inurnment with military rites will follow at Greenton Cemetery. In lieu of flowers, Memorials are suggested to the Odessa Senior Center/Care Connection or Greenton Cemetery Association. Memories of John and condolences for his family may be left at www.ledfordfamilyfh.com or on our Facebook Page. Arrangements have been entrusted to the Ralph O. Jones Funeral Home, 306 S. 2nd St., Odessa, MO, 64076, 816-633-5524 John was born on September 14, 1937 in Springhill, MO. He was the son of Johnnie Zullig and Opal Zullig. He graduated from Chillicothe High School in 1954. He served in the Army National Guard for 3 years. John was a member of the American Legion, Knights of Pythias Lodge and the First Baptist Church. He worked for the Missouri State Highway Department, Lexington Hospital and retired from the Odessa R-7 School District as a Custodian. John married Shelby Jean Murry on October 28, 1960 in Odessa, MO. On January 1, 2010 she preceded him in death. He was also preceded in death by a son, Steve on March 21, 2015, his parents and a brother, Charles R. Zullig. John loved tractors. For many years he plowed gardens and provided snow removal to many in the Odessa community. In years back he participated in local parades with his old restored tractors. John loved the outside and gardening. He enjoyed walking and visiting with friends at the Odessa Senior Center. Survivors include his daughter, Suzanne Zullig of Odessa; four beautiful blessings, Caden, Madilyn, Mason and Harper; a sister, Doris Mae Breeden of Chillicothe and a host of nieces and nephews.

The family of John Madison Zullig created this Life Tributes page to make it easy to share your memories.

John Madison Zullig, 81, of Odessa, Missouri passed away on Monday,...

Send flowers to the Zullig family.