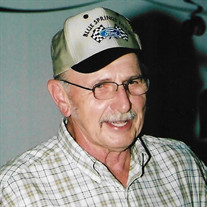 John Joseph Pitloun Jr., 74, of Odessa, Missouri passed away on Sunday, January 10, 2021 at his home. A visitation will be held from 6:00 p.m. to 8:00 p.m. on Thursday, January 14, 2021 at Ralph O. Jones Funeral Home, 306 S. 2nd Street, Odessa, MO, 64076, 816-633-5524. A funeral service will be held Friday, January 15, 2021 at 1:30 p.m. at the funeral home. Masks are required. Burial with Military Honors will follow at the Missouri Veterans Cemetery, 20109 Bus, MO-13, Higginsville, MO 64037. Memorials are suggested to the VFW 5675 or Disabled American Veterans. Memories of John and condolences for his family may be left at www.LedfordFamilyFH.com or on our Facebook Page. John was born on September 9, 1946 in Omaha, Nebraska to Bess (Vasek) and John Joseph Pitloun, Sr. John was baptized as an adult in 1978 in the Fellowship Baptist Church in Omaha, Nebraska, and later in life became a member of the Calvary Baptist Church in Graniteville, Missouri. He served on numerous boards and as a youth director for the church. He joined the Army in 1966 and earned the National Defense Service Medal as well as the Expert Rifle Badge. John was united in marriage to Evelyn Ann Hartwick on May 10, 1968 in Omaha, Nebraska. He worked for the City of Odessa Water Treatment Plant as a Water Operator for 15 years before moving on to the Little Blue Valley Sewer Treatment Plant in Independence, Missouri. He retired after 11 years. In addition to spending time with family and friends, John enjoyed fishing, hunting, gardening, and was a member of the VFW 5675. John is survived by his wife, Evelyn Ann (Hartwick) Pitloun, of Odessa, MO; three daughters, Kimberly Harris and husband Danny of Lincoln, MO, Charlene (Pitloun) Hunter of Odessa, MO, and Amy Ponak and husband Nathan of Odessa, MO; seven grandchildren, David Harris, Emily Bargen, Tyler Hunter, Kynlee Hunter, Jaelynn (Pitloun) Brodeur, Jenna Ponak, and Hayden Ponak; one great-grandchild, Ren Bargen; three sisters, Jeanne DeLoa and husband Johnny of Omaha, NE, Janet Anderson of McCook, NE, and Joann Sandoval of Omaha, NE; as well as many nieces and nephews. In addition to his parents, John was preceded in death by two brothers, Jimmy and Joey Pitloun.

The family of John Joseph Pitloun Jr. created this Life Tributes page to make it easy to share your memories.

Send flowers to the Pitloun family.