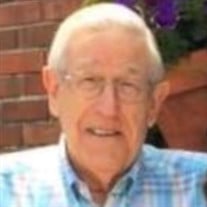 Judge John Gary Miller, 80, of Odessa, Missouri passed away on Monday, March 15, 2021 at his home. A private family funeral service will be held on Saturday, March 20, 2021 at Ralph O. Jones Funeral Home, 306 S. Second Street, Odessa, MO, 64076, 816-633-5524. Burial will follow at the Greenton Cemetery in Odessa, MO. Friends may pay their respects during the hours of 1:00 p.m. to 5:00 p.m. on Thursday, March 18, 2021. Memorials are suggested to The Lyons Scholarship Foundation or Christ Episcopal Church of Lexington, MO. Memories of John and condolences for his family may be left at www.LedfordFamilyFh.com or on our Facebook Page. John was born on August 7, 1940 in St. Joseph, MO to Charles Ernest and Ruby Nell (Dick) Miller. He attended Todd Grade School in Andrew County, MO then graduated from St. Joseph Lafayette High School before attending Northwest Missouri State University in Maryville, MO. In May of 1962, John was united in marriage to Elizabeth Rose (Hankinson) in St. Joseph, MO. He taught high school for the Maysville school district from 1962 to 1964 before attending and graduating with honors from the University of Missouri at Kansas City where he earned his Jurisprudence Degree and was selected to be a member of the Law Review. Beginning in 1967, John worked for Linde Thompson Law Firm in Kansas City. He also served as judge for the city of Gladstone, MO, and was active in the Northland Republican Club. In 1974 he was associated with Cochran, Tyree, Oswald and Miller Law Firm of Blue Springs, MO with his office being located in Odessa, MO. He later established his own law firm in Odessa. During these years, John was an active member of the Odessa Lions Club and served as judge for the City of Odessa. In 1986 he was appointed to complete the term of Associate Circuit Judge for Lafayette County District Court. John served in this position unopposed for 25 years until retirement. He served as a member of Charles Lyons Scholarship Foundation from 1982 and presently held the position as Chairman. John was also a member of a duplicate bridge group, couples bridge club, and several other card groups. In addition to spending time with family and friends, he loved reading history and amassed an extensive library of books, all he had read at least once. John honored his parents and cherished his long-time friends from youth as well as those of his adult life, and above all, he was devoted to his family. Survivors include his wife, Elizabeth, of 58 years; a daughter, Ann Elizabeth Davidson and husband, Marc of Odessa, MO; a grandson, Trent Davidson of Odessa; a sister, Judy Holtz and husband, James of Fairfax, MO; a sister-in-law, Lorraine Miller of Temple, TX; and many nieces, nephews, relatives, and friends. John was preceded in death by his parents; a son, John David Miller; and a brother, Colonel Charles Ernest Miller, II.

The family of Judge John Gary Miller created this Life Tributes page to make it easy to share your memories.

Judge John Gary Miller, 80, of Odessa, Missouri passed away on...