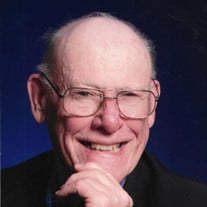 John Edwin Bryan, 89, of Olathe, Kansas, formerly of the Lexington and Higginsville, Missouri area, was called to his heavenly home on January 11, 2022 at Good Samaritan Society, Olathe, Kansas. A funeral service will be Tuesday, January 18, 2022 at 11:30am at the First Baptist Church of Higginsville, 1907 Peach Street, Higginsville, Missouri 64037. Visitation will also be on Tuesday at the church from 10:00 until 11:30 am. Burial with Military Honors will be at Missouri State Veterans Cemetery, Higginsville on Tuesday at 1:00 pm. The family requests that masks be worn. Memorials may be made to the Lexington First Baptist Church. Memories and condolences may be left at www.LedfordFamilyFH.com. Arrangements have been entrusted to Walker-Nadler-Fuller Funeral Home, 1720 South Street, Lexington, MO 64067, 660-259-2245. John was born July 31, 1932 in Kansas City, Missouri, the son of Lyle and Anna (McNeil) Bryan. He graduated from high school in Lincoln, Missouri. He attended Flat River Junior College, graduating with an Education Degree. He then earned his BS Degree in Education and a Master's Degree in Elementary Education from Central Missouri State College. John married Hilda Baker on August 18, 1956. John served in the United States Marine Corps as a radio operator from 1953 to 1957, where he also served in the Korean War. John taught 5th grade in Raytown and Lexington for many years. He also worked for Mattingly Brothers in Lexington and Walmart in Richmond. He held the position of custodian at the First Baptist Church in Lexington until his retirement. John was a member of Blue Valley Baptist Church Retired Sunday School Class in Overland Park, Kansas and former member of the First Baptist Church of Higginsville as well as the First Baptist Church of Lexington, where he served as a Sunday School teacher and Deacon, and sang in the choir. He and his wife, Hilda, moved to Higginsville, Missouri and resided at Meyer Care Center until her passing. He then lived independently until 2015 when he moved in with his daughter and son-in-law. Survivors include, two sons, William Bryan and wife Anna of Overland Park, Kansas and Robert Bryan and wife Karen of Union, Missouri; one daughter Ruth (Bryan) Jacobs and husband Scott of Olathe, Kansas; and one granddaughter, Gabrielle Zurita and husband Miguel of Austin, Texas. John was preceded in death by his parents; one sister, Barbara Lackman; and his wife of 49 years, Hilda.

John Edwin Bryan, 89, of Olathe, Kansas, formerly of the Lexington and Higginsville, Missouri area, was called to his heavenly home on January 11, 2022 at Good Samaritan Society, Olathe, Kansas. A funeral service will be Tuesday, January 18,... View Obituary & Service Information

The family of John Bryan created this Life Tributes page to make it easy to share your memories.

John Edwin Bryan, 89, of Olathe, Kansas, formerly of the Lexington...

Send flowers to the Bryan family.