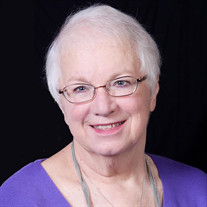 Jeane Barnes Massey, age 82, passed away peacefully, surrounded by her husband and children, at her home in Odessa, Missouri, on Sunday, May 31, 2020. Jeane was born on January 8, 1938 in Robbinsville, North Carolina, located in the Great Smokey Mountains National Park. She was the second of six children born to Wayne W. Barnes and Naomi C. Barnes, both deceased. Four siblings survive her: Carole B. Pelletier, Wanda B. Eastep and husband Bob, David V. Barnes, all of Morehead City, North Carolina, and Brant A. Barnes and wife Karen of Sylva, North Carolina. Her brother, Wayne L. Barnes, preceded her in death. In August of 1961, in Jeane’s hometown of Morehead City, North Carolina, she married Syd Douglas Massey, who grew up in Porter, Texas, and was a Corporal in the Marine Corps. He survives his wife. They had three children. Kelley Leah, their first daughter, preceded Jeane in death at the age of eight months. Jeff Douglas and wife Jean of Wildomar, California and Joan Leslie (Massey) Hopkins and husband Jeff of Odessa, Missouri, completed their family. These two children survive their mother. Jeane received her education from Campbell College, Buies Creek, North Carolina, earning an Associates in Arts Diploma in 1958. She used this education to first work as an assistant to the owner of Morehead City Garment Company, a men’s shirt manufacturing company, in Morehead City, North Carolina. After her marriage in 1961 she and her husband moved to Beaufort, South Carolina. There she taught business education classes for several years in a Federal Education Program. This program was designed to improve employment opportunities for under-educated and unemployed individuals. Following this, she began working in the world of insurance, employed by Kinghorn Insurance Agency in Beaufort, South Carolina, until she retired in 1998. She continued working from home as a Consultant/Contract Employee for the agency until 2001. While at Kinghorn Insurance, she was presented the Rotary Club Outstanding Employee of the Year award in 1992. After completely retiring, Jeane’s life took a magical turn. In July 2001, she established a wedding business, Milady’s Marriage Memories, a marriage ceremony business which she operated out of her own home. Because of South Carolina’s unique laws, she was legally able to officiate weddings. In this capacity, she performed wedding ceremonies for 272 couples before moving to Odessa, Missouri in 2004. Before and after retirement, Jeane dedicated many hours to the Methodist Church in Ellijay, Georgia and Beaufort, South Carolina. These hours included teaching Sunday school, singing in and directing the choir, writing and directing musicals and Biblical productions, leading the women’s organization (UMW) for several years, and occasionally filling in as a Lay Minister. Her greatest joy, one of her favorite hobbies was writing, especially poetry. She self-published on book of poetry named Feelings. The “Great American Novel,” titled The Sunday Night Ladies, remains unfinished. She spent the later years of her life doing genealogy research, followed by writing family history books for both branches of her family and both branches of her husband’s family. She also enjoyed designing one-of-a-kind quilts which she hand appliqued. (She had someone else do the actual quilting.) In addition to those already listed, Jeane is survived by her granddaughters: Christina Lee Lester and husband who lives in Texas; Jennifer Dianne Massey and Stephanie Lynn Massey, who live in California; her grandsons: Caleb Seth Hopkins, Travis Shane Hopkins, and William Cody Hopkins, all who live in Odessa, MO. Additionally, seven great-grandchildren survive, together with a host of nieces and nephews, and many cousins. These relatives are scattered from Arkansas, California, Florida, Georgia, Missouri, North Carolina, South Carolina, and Texas. Per Church Requirements, Everyone is required to wear a Face Mask. Please bring your Face Mask if you will be attending either service. A visitation will take place from 10:00 a.m. to 11:00 a.m., Thursday, June 4, 2020 at the St. George Catholic Church, 714 S. 3rd Street, Odessa, MO 64076. A Mass of Christian Burial with Celebrant Reverend Father Bryan Amthor officiating will be held at 11:00 a.m. A Rite of Committal will take place at 1:00 p.m. at the Missouri Veterans Cemetery, located at 20109 Business Highway 13, Higginsville, MO, 64037. Memorials are suggested to and may be sent to St. George Catholic Church. Arrangements have been entrusted to Ralph O. Jones Funeral Home, 306 S. 2nd Street, Odessa, MO, 64076, 816-633-5524. Memories of Jeane and condolences for her family may be left at www.LedfordFamilyFh.com or on our Facebook Page.

Jeane Barnes Massey, age 82, passed away peacefully, surrounded by her husband and children, at her home in Odessa, Missouri, on Sunday, May 31, 2020. Jeane was born on January 8, 1938 in Robbinsville, North Carolina, located in the Great Smokey... View Obituary & Service Information

The family of Jeane B. Massey created this Life Tributes page to make it easy to share your memories.

Send flowers to the Massey family.