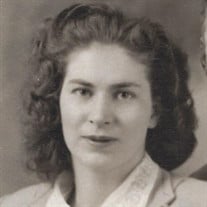 Jean Lucille Jackson Simmons, 97, of Odessa, Missouri died Sunday, August 2, 2020 in her home surrounded by her family. Visitation will be held from 10:00 a.m. to 11:00 a.m., Wednesday, August 5, 2020 at the Ralph O. Jones Funeral Home, 306 S. 2nd St., Odessa, MO, 64076, 816-633-5524. A funeral service will follow at 11:00 a.m., Wednesday, August 5, 2020 at the funeral home. Interment will be in the Odessa Cemetery. In lieu of flowers, the family suggests contributions to the Lumicare Hospice of Blue Springs or the Odessa Cemetery Association. Memories of Jean and condolences for her family may be left at www.LedfordFamilyFH.com or on our Facebook Page. Jean Jackson Simmons was born to Murray and Lulu (Weaverling) Jackson on February 8, 1923 in Holden, Missouri. She graduated from College High School in Warrensburg, Missouri in 1941. Jean was a member of the First Christian Church in Odessa, MO. On March 10, 1945, she married Chester Alvin Simmons in Olathe, Kansas. He preceded her in death on April 18, 1992. Jean was a homemaker and helped with the family farm. Jean is survived by one sister, Vivian Parsons of Warrensburg, Missouri, a son Dennis and wife Marcia Simmons and a daughter Connie Lee and her husband Danny all of Odessa. Her four grandchildren are Matthew Simmons of Columbia, MO, Charles Simmons of Blue Springs, Mo, Erin Lee of Belleview, Ky and Alec Lee of Kansas City, MO. In addition to her parents and husband, Jean was preceded in death by a brother Norman L. Jackson.

The family of Jean Lucille Simmons created this Life Tributes page to make it easy to share your memories.

Send flowers to the Simmons family.