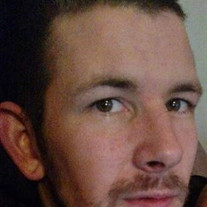 Jason Tyler Babcock, 27, of Warrensburg, MO formerly of Odessa, MO passed away on Friday, February 14, 2020 at Research Medical Center in Kansas City, MO. The family will host a Celebration of Life from 2:00 p.m. to 6 p.m., Saturday, March 7, 2020 at the Odessa Senior Center, 217 S. 2nd St, Odessa, MO. Per Jason’s wishes, cremation. Services have been entrusted to Ralph O. Jones Funeral Home, 306 S. 2nd Street, Odessa, MO, 816-633-5524. Memorials are suggested to the family, in care of Shelly Keehler. Memories of Jason and condolences for his family may be left at www.LedfordFamilyFH.com or on our Facebook Page. Jason was born on March 5, 1992 in Kansas City, Missouri to Bryan LaQuet and Shelly (Babcock) Keehler. Jason was a graduate from Odessa High School. He worked in the kitchen at Casey’s General Store in Warrensburg, MO. Jason was a great father, son brother, and friends. In addition to spending time with friends, Jason enjoyed fishing and spending time with his son. In addition to his parents, survivors include one son, Damien Babcock; and two sisters, Lacey Babcock and fiancé Matthew Plubell and Katana Schmidt all of Blue Springs, MO. Jason is also survived by a paternal grandmother, Liz German of Kansas City, MO. Jason was preceded in death by a sister, Aliesha Keehler and his maternal grandparents, Dewey and Barbara Babcock.

The family of Jason Tyler Babcock created this Life Tributes page to make it easy to share your memories.

Send flowers to the Babcock family.