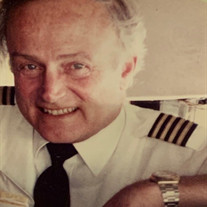 Tryon, NC--James Winn Tabb passed from this life in the late evening on Monday, January 27, 2020, from cancer. He was a well-known resident of Tryon, NC, living in the “Storybook House” at Top of Piney, and in more recent years, Bright’s Creek in Mill Spring, NC. He was born in Lexington, Missouri on August 12, 1932, and was the son of Robert Peyton Tabb and Elmira Winn Tabb. Jim graduated Lexington H.S. in 1950 and proceeded to Wentworth Military Academy (Jr. College) until 1951, followed by one year at Braden Preparatory School at Cornwall-on-Hudson (for West Point), returned to Wentworth 1952 to 1953 to graduate (also serving in the Missouri Army National Guard 1949-1953). Jim received an appointment to the U. S. Military Academy at West Point and attended for a year and a half until a football injury ended that endeavor. Jim had always been fascinated with airplanes and flight from his youth, so in 1955, he joined the Air Force and started Air Traffic controller training at Keesler AFB in Mississippi, in hopes of eventually becoming a pilot. While there he came into contact with people who advised him that he would have a chance to fly a lot sooner if he were able to transfer to the Navy, which he did in 1957; a rare inter-service transfer. After naval flight training, in 1959, he proceeded to an A-4D Skyhawk Squadron (VA-106, Gladiators, USS Shangri La CVA-38) serving until 1963. One of his more dangerous roles was tactical air delivery of nuclear bombs on Eastern Bloc targets if necessary. When he transferred to VA-42 (Green Pawn, USS Forrestal CV-59) in 1963, at the time VA-42 became the first fleet squadron to receive the A-6 Intruder, and finally transferring to the USNR in October, 1964. Very few people have served and worn the uniforms of three military services (USA, USAF and USN)! Following his military service, he began his commercial pilot career with TWA where he qualified for and flew the Convair 880, and Boeing 707, 727, 767, and 747, retiring in 1991. Most of his career was on international routes. (He had a temporary reactivation 1966-68 serving on the USS Forrestal (CV59), attaining the rank of Lieutenant Commander.) In his other life, as a long time nationally recognized BBQ aficionado, Kansas City BBQ and Memphis in May Certified Judge, Jim was active throughout the country and internationally within the BBQ world. However, he also became known due to his membership in the International Association of Culinary Professionals, and had an opportunity to associate with many internationally renowned personalities, such as; Merle Ellis, Julia Child, Graham Kerr, Jacques Pepin, and many more, including conducting three major fund raisers for Julia. As an active member of the Tryon community, Jim made a huge contribution to Tryon and Polk County by creating and initiating what became known as the Blue Ridge Barbeque and Music Festival in 1993, which with assistance by and coordination with the Foothills Chamber of Commerce grew into a major event every year until 2015. It grew in prestige and notoriety attracting many of the best BBQ competition teams in the nation, and introduced many music groups, including future stars. It was honored by the Governor of North Carolina as sanctioning it as the state’s official Barbeque Championship. He is survived by his loving wife Kathleen Rose (Costello) Tabb; and his first wife Joan (Maffei) Tabb the mother of his daughters Lee Ann Elizabeth Whippen, and Diane Margaret Berglund; grandchildren: Britney Elizabeth Matz, Samantha Lee Whippen, Taylor Winn Berglund, Vaughn William Berglund; great grand-daughter Charlotte Elizabeth Matz; his nephews Robert Peyton Tabb IV, George William Tabb, Richard Barham Tabb and John Charles Tabb, and their spouses, children, and grand-children. The family will receive friends on Friday, January 31, 2020 3:00 p.m. to 3:45 p.m. at McFarland Funeral Chapel in Tryon, NC. A funeral will follow at 4:00 p.m. officiated by Dr. Chris Osborn. A graveside service will be held in Lexington, Missouri on Monday, February 3, 2020 at 1:00 p.m. followed by full military honors burial at Machpelah - Memorial Park Cemetery in Lexington. In lieu of flowers, donations in remembrance can be made to the Hospice of the Carolina Foothills, P.O. Box 336 Forest City, NC 28043 or to Foothills Humane Society, PO Box 985 Columbus, NC 28722.

Tryon, NC--James Winn Tabb passed from this life in the late evening on Monday, January 27, 2020, from cancer. He was a well-known resident of Tryon, NC, living in the &#8220;Storybook House&#8221; at Top of Piney, and in more recent years,... View Obituary & Service Information

The family of James Winn Tabb created this Life Tributes page to make it easy to share your memories.

Tryon, NC--James Winn Tabb passed from this life in the late...

Send flowers to the Tabb family.