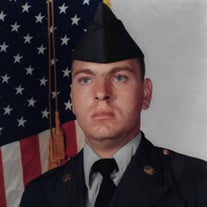 James Allen Barker, 54, beloved father, son, brother, nephew, uncle, cousin and friend of Odessa, Missouri passed away on Wednesday July 24, 2019 at the V.A. Hospital in Kansas City, MO surrounded by family. Family and friends are invited to a visitation lunch from 11:30 a.m. to 12:45 p.m., Tuesday July 30, 2019 at the Mt. Tabor United Methodist Church, 12507 Mt. Tabor Rd., Odessa, MO, 64076. A Celebration of Life will follow at 1:00 p.m. at the church. Inurnment will be in the Higginsville City Cemetery in Higginsville, MO. Memorials are suggested to the Mt. Tabor United Methodist Church. Arrangements have been entrusted to the Ralph O. Jones Funeral Home, 306 S. 2nd St., Odessa, MO, 64076, 816-633-5524. James was born on July 1, 1965 in Kansas City, MO to James B. and Doris Barker. James was loved and respected by his family, friends, and co-workers. James was a Boy Scout and earned the highest rank of Eagle Scout. He was a graduated of Odessa High School Class of 1983. James was working for Hickerson Cable in Grandview, MO and was also an electrician for many years. He was stationed in Germany while serving in the United States Army. In 2017 he earned a management degree from National American University. Survivors include his best friend Cindy; three children, Nikita, Makayla, and Justyn Barker all of Lee’s Summit, MO; father, James B. Barker of Odessa, MO; two brothers, Jerry Buis and wife Janet of Odessa and Lennord Buis and wife Vonnie of Springfield, MO; two sisters , Darlene Hall and husband Russ of Blue Springs and Charleen Merriman of Marshall, MO and many family, friends, nieces and nephews. James was preceded in death by his mother, Doris Barker, a daughter, Kelsie Barker and all the other family members and friends who passed before him.

The family of James Allen Barker created this Life Tributes page to make it easy to share your memories.