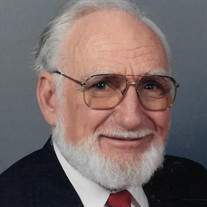 Herbert R. “Dick” Pennington Jr, age 88, of Odessa, MO died July 8, 2019, at the Oak Grove Nursing and Rehab Center where he had been a resident for the last 8 months. Mr. Pennington was born April 11, 1931, in Fairfield, IL, to Herbert R. and Sylvia (Wylie) Pennington. He graduated from Fairfield High School in 1948; and from Lockyear’s Business College, Evansville, IN before joining the US Army in 1949. He attended basic training at Fort Chaffee, AR and served with 2nd Infantry Division in Korea; then the 101st Airborne Division, where he became sergeant major of the 53rd Infantry Regiment at 20 years of age. He later served tours at Ft. Myer, VA; Ft. Meade, MD, and as post sergeant major at Camp Breckenridge, KY. He was appointed a Warrant Officer and served in Germany, Ft. Leonard Wood, and Vietnam. He retired as a CW3 in 1969. He married Anna May Paul on May 29, 1952 in Sturgis, KY. After his retirement from the US Army, the Penningtons resided in Waynesville, MO until 2016 when they moved to Odessa, MO. Dick was an active voice for military retirees. He was a lifetime member of the VFW, DAV, American Legion and the Military Officers Association. He initiated the ongoing Memorial Day event of the “Laying of Wreaths” at the Fort Leonard Wood Cemetery and the Sunset Memorial Cemetery. He was also a member of the Waynesville Masonic Lodge #375; past Worthy Patron of the Hanson Chapter #22, Order of Eastern Star; Sons of the American Revolution; National Sojourners; and Toastmasters International. Mr. Pennington served on the Waynesville R-6 Board of Education. He was an avid genealogist and enjoyed stamp collecting, woodworking, and “tinkering.” His parents, a sister, Mary Parrent; and a half-brother, Clifford Pennington, preceded him in death. He is survived by his wife of the home; a brother-in-law, Russell Parrent of Fairfield, IL; 2 daughters & sons-in-law: Sylvia & Steve White of New Castle, CO; Nancy & Burney Miller of Odessa, MO; 2 sons & daughters-in-law: Don & Vickie Pennington of New Castle, CO; and Jim & Valerie Pennington of Odessa, MO. He also leaves behind 7 grandchildren, 2 step-grandchildren, and 14 great grandchildren. He left a legacy of patriotism, faith, and commitment. Services will be held at the Hazelgreen United Methodist Church, 32014 Rte. 66, Richland, MO, 65556 at 4 PM on Sunday, July 14, 2019. Visitation will be one hour prior at the church. Burial will be on Monday, July 15, 2019 at 10:00 a.m. the Fort Leonard Wood State Veterans Cemetery. Memorials can be made to: Camp Breckenridge Museum & Arts Center, 1116 Village Square Road, Morganfield, KY 42437 or to Hazelgreen United Methodist Church, 32014 Route 66, Richland, MO 65556.

The family of Herbert "Dick" Richard Pennington Jr. created this Life Tributes page to make it easy to share your memories.

Send flowers to the Pennington family.