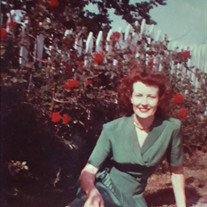 Heaven has gained an angel. Helen Kopmann, age 97, passed away peacefully on the morning of November 23, 2020, at her daughter's home in Kansas. Born 1923, Helen was the daughter of Edwin Rehmsmeyer and Thelma Smith Rehmsmeyer of Dover, Missouri and the wife of Albert Joseph “Joe” Kopmann, Jr. of Lexington, Missouri.As a young teenager, Helen played piano for church in Dover, became a cheerleader, played catcher for the women’s softball team, and began a lifelong love of music and sports. She was honored for academic achievement as valedictorian of her high school graduating class and earned a scholarship to Missouri Teachers' College in Warrensburg, Missouri, where she became a member of the synchronized swimming team. During WWII, she taught school in Lafayette County and sang with an orchestra for the U.S. military’s USO.Helen became a member of the Disciples of Christ Christian Church in Dover and later, joined the Christian Church at Lexington where she represented the women’s group on the board, taught Sunday school, directed youth chorus, and conducted after-school Chi-Rho meetings. Helen was also a Red Cross volunteer at the Lexington Hospital. In retirement, she became a resident representative to the board of John Knox Village, Higginsville, Missouri.Helen and Joe traveled extensively throughout the U.S., Canada, and overseas, always finding botanical gardens to explore. In addition to visits to Australia, New Zealand, Scotland, and Ireland, they made a special trip to London to attend the Chelsea Flower Show. A 1950’s visit to Cypress Gardens in Florida may have inspired the first of many beautiful flower gardens created on their farm, where out-of-state visitors visited each year to collect seeds and bulbs. While spending nearly 50 winters in the Florida Keys, where Joe loved to deep-sea fish, Helen enjoyed reading, writing letters to family, meeting new friends, and competing in regional Bocce tournaments. At age 96, she still played the piano, wrote songs, and remained a loyal fan of her favorite Kansas City Royals.Helen was preceded in death by her husband Joe, her father Ed, mother Thelma, and her brother Melvin. She is survived by her four children, four grandchildren, eight great grandchildren, her sister-in-law Mary Rehmsmeyer, three nieces, and three nephews. She will be remembered lovingly by many friends, neighbors, and former students for her smile, willingness to listen, and warm words of encouragement, but Helen will be especially missed and remembered by her family for her unconditional love.Private graveside services were held and burial took place at Machpelah Cemetery, Lexington, Missouri.

Heaven has gained an angel. Helen Kopmann, age 97, passed away peacefully on the morning of November 23, 2020, at her daughter's home in Kansas. Born 1923, Helen was the daughter of Edwin Rehmsmeyer and Thelma Smith Rehmsmeyer of Dover, Missouri... View Obituary & Service Information

The family of Helen Kopmann created this Life Tributes page to make it easy to share your memories.

Heaven has gained an angel. Helen Kopmann, age 97, passed away...

Customized sympathy cards. Mailed for you.