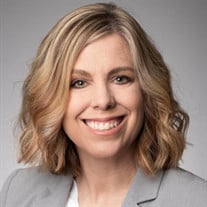 Heather Judith (Carey) Palmer, 46, of Odessa, Missouri passed away on Wednesday, October 7, 2020 at Research Medical Center in Kansas City, MO. A Rosary will be recited at 9:30 a.m., Wednesday, October 14, 2020 at the St. George Catholic Church, 716 S. 3rd Street, Odessa, MO, 64076. A Mass of Christian Burial with Celebrant Father Bryan Amthor will begin at 10:00 a.m. at the church. A Rite of Committal will follow at the Odessa Cemetery in Odessa, MO. A dinner will be held at 12:00 p.m. at the Odessa Community Center. Memorials are suggested to the family in care of Robert Carey, for a nursing scholarship that will be set up at a later date. Arrangements have been entrusted to Ralph O. Jones Funeral Home, 306 S. 2nd Street, Odessa, MO, 64076, 816-633-5524. Memories of Heather and condolences for her family may be left at www.LedfordFamilyFH.com or on our Facebook Page. Heather was born on May 18, 1974 in Burbank, CA and raised by her parents Robert “Bob” Michael and Maureen Kay (LaSuer) Carey in Camarillo, CA. After graduating from La Reina High School in Thousand Oaks, CA in 1992, she attended California Lutheran University, earning her bachelor’s degree in Business Administration in 1996. Heather attended law school while working in the Camarillo, CA area. On December 27, 2003 she was united in marriage to Forest “Wayne” Palmer in Camarillo, CA. Heather and Wayne relocated to his hometown of Odessa, MO where she then decided to pursue a job in healthcare. Starting in 2005 Heather started out as a CNA then as a nurse intern at Independence Regional Medical Center, subsequently becoming Centerpoint Medical Center, while also attending William Jewell College. After earning a Bachelor of Science in Nursing degree she accepted a Registered Nurse position in 2007. She later earned a Master of Science with an emphasis in Nursing Administration from Western Governors University. Her career saw her go through many management positions at Centerpoint Medical Center, then being named VP of Nursing Operations for the HCA division located in Kansas City. In 2018 Heather accepted the position as the Chief Nursing Officer for Belton Regional Medical Center. Heather was a member of the St. George Catholic Church in Odessa, MO. In addition to spending time with family and friends, she enjoyed boating, going to the lake, and attending all sporting events of her kids and their friends. She was a most devoted Mother! In addition to her husband and parents, survivors include four sons, Zachary Palmer and wife Jordan, Braedon, Bryce, and Zane Palmer all of Odessa, MO; one daughter, Isabella Palmer of Odessa, MO; a grandchild, Rowan Palmer; a brother, Jordan Sisson and wife Anne of Riverside, CA; a sister, Nicole Prado and husband Ozzie of Odessa, MO; and biological parents, Tim and Jodi Sisson.

The family of Heather Judith Palmer created this Life Tributes page to make it easy to share your memories.

Send flowers to the Palmer family.